Survival of the Sickest

A few tips on getting through three days of the nastiest, vilest, most depraved rock shows this town has ever seen. 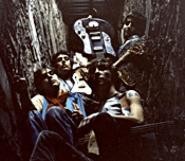 Sometimes truly awful stuff rules, like microwaved burritos, deadly NASCAR collisions, and Teen Wolf. Vying to join that hallowed list is the first annual Horriblefest, a three-day punk-rock blowout beginning Thursday, when some of the most vile, weird, depraved, and kick-ass bands in the land will converge on Cleveland. Oh, man. This could be even better than Swimfan.

With 30 acts playing at three different venues (the Beachland Ballroom, Moe's Tavern, and the Blacklist Art Gallery), Horriblefest is one of the biggest events of its kind this city has seen. The concept was born when show promoters Russ "Romance" Murphy and Ryan Dahl caught a Chicago gig by randy funk oddball Blowfly.

"One of us said something along the lines of 'This is horrible, but also amazing and great!'" Murphy says. "The concept seemed to fit the fest well too -- a lot of people would think it's a horrible idea to have 30 bands, many with crazy reputations, all playing in one weekend. But for the right people, it should be a great time."

But with so many bands to take in, the fest will be an endurance test for even the most grizzled punk diehards. With this in mind, we've come up with some handy Horriblefest survival tips. Grab the Excedrin, and let's go.

Punch yourself in the nuts. Repeatedly.
If you're gonna try and make it through sets by ultra-antagonistic bands like Holy Shit!, Rot Shit, or the Homo Stupids, you're gonna have to seriously increase your pain threshold. Milwaukee's Holy Shit! blasts out warp-speed crust punk that the band describes as the sound of "your parents fisting each other." (Go ahead, take a second, and let that visual sink in.) Pittsburgh's Rot Shit comes with tone-deaf coed screeching about sex and hot dogs. And Cleveland's Homo Stupids make wackjob noisecore that's about as pleasant as waking up with your head stapled to the carpet. A couple dozen shots to the groin with a croquet mallet oughta get you warmed up for these headcases.

When Clockcleaner plays, stand at least 10 feet from the stage.
Philly's Clockcleaner just might be the creepiest band at Horriblefest -- and that's really saying something, considering that Saturday-night headliners the Jabbers have a song called "Cunt Sandwich." Clockcleaner makes the kind of neurotic, bass-driven scuzz rock that made the Jesus Lizard kings of the underground a decade ago. And the singer is particularly unsettling, yammering in a schizophrenic bleat that's buried in the mix beneath two tons of cigarette butts. Dude sounds like he spends his downtime mumbling in a corner somewhere, scratching at imaginary spiders crawling over his arms. Give the band a wide berth, just in case it's catching.

Don't bother bathing.
Bad hygiene = good rock and roll. Seriously. Lemmy Kilmister hasn't bathed since the Kennedy administration, and that was only because he passed out in the rain. Many of the Horriblefest bands promise to be just as pungent as the mighty Motörhead frontman, traveling in vans packed with greasy dudes sweating out cheap beer from the night before. Hell, some of the groups even celebrate malodor. Scruffy French punks the Creteens bang out a pop nugget called "My Baby Don't Shower." "Baby, let me tell you/I like it when you stink," they yelp. No doubt they'll have plenty to lust over this weekend.

Leave your lady at home when the 'Puppet plays.
Consider titles like "Part-Time Lover, Full-Time Fucker" and "Take Your Thumb Outta Your Mouth (And Suck on This)," and you can tell that Cuntpuppet will go over really well with the ladies. Clearly, these dudes have mastered the fine art of seduction. "Just because you sucked on my third knee/Doesn't make you the boss of me" they sing on the touching "You Can't Stop Me From Drinkin', Bitch." Girls love to hear stuff like that, and you don't need that kind of competition. Still, the 'Puppet's set is not to be missed. The group sounds like Cheap Trick on cheap coke, with badass guitar solos. Just leave the missus at home.