Side dishes are savory at Actors' Summit's Picnic. 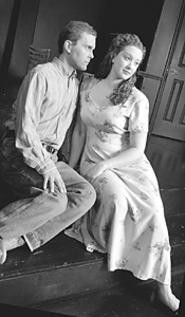 It's kind of a shame, but the world just ain't safe for drifters anymore. These days, if a scruffy young man knocked on most front doors, looking for work in exchange for food, he'd soon be spread-eagled on the sidewalk by a SWAT team, dragged off in shackles, and held incommunicado. Back in the 1950s, however, an old woman would have welcomed the ne'er-do-well, given him a hearty breakfast, and proceeded to launder his dirty clothes -- whereupon he would have changed everyone's lives for the better. At least, that's what we're led to believe by Picnic, William Inge's Pulitzer Prize winner, which is now at Actors' Summit. And while the company's lead actors miss the boat, there are so many small delights -- from fully realized secondary characters to tight ensemble performances -- that it's worth packing a hamper for the trip to Hudson.

The decades have not been kind to Inge's script, which plops freight-train drifter Hal into a small Kansas burg that is home to his rich college pal, Alan. It's late summer, and sweaty stud Hal soon has most of the women in the neighborhood fumbling for their fans and smelling salts as he struts through their backyards, showing off his bare pecs (his shirt's still in the wash). Eventually, on-the-make Hal locks eyes with Alan's beauteous but airheaded best girl Madge, which pretty much pisses off Madge's mom, Flo (solidly played by MaryJo Alexander), and -- well, you can predict the rest. Swirling around this love triangle are Madge's bratty and brainy younger sister Millie, who longs for her sister's looks; Flo's middle-aged boarder Rosemary, a spinster schoolteacher who's hot to get hitched to the hapless Howard; and next-door pal Helen, the friendly golden-ager who started the whole thing by frying Hal's eggs.

Fifty years ago, playwright Inge intended to make this work a piercing study of small-town hopelessness and desperation, but his director, Joshua Logan, insisted on sweetening it up, apparently to the approval of the mid-'50s Pulitzer judges, but to the long-term detriment of the piece. While there are plenty of desires and frustrations trotted out, none of them really catches fire and transports you the way, say, the scripts of Inge's contemporary, Tennessee Williams, still do.

What does work, however, are the smaller roles, as presented by the Actors' Summit cast. Flo's boarder, the sexually repressed Rosemary, is played with writhingly anguished humanity by Lucy Bredeson-Smith. Although she leaves a few too many tooth marks on the scenery during her drunk scene, Bredeson-Smith's sharp-edged features and commanding stage presence are fascinating; she literally begs not to be left alone in life. Her reluctant boyfriend, local shop owner and not-so-secret tippler Howard, is given a warm and ingratiating portrayal by Bob Keefe. As Millie, Eryn Murman is an exceptionally natural teenager, as she spats with Madge and struggles with her blossoming femininity. And Ellen Rankin is effective as the good-natured Helen.

Also notable is the smooth ensemble performance of the cast as they gather at various times, bubbling and buzzing in anticipation of the Labor Day picnic festivities. This mood is enhanced whenever two of Rosemary's teacher buddies, Irma (Pamela LaForce) and Christine (Marcia Mandell), breeze through on a zephyr of gossipy chatter, fluttering their white-gloved hands as they pass by. Director and set designer Neil Thackaberry beautifully meshes all these players on his believably rustic porch-fronted house.

Regrettably, the central relationship between Madge and Hal never comes close to igniting the way it must to justify the events at the end of the play. As Hal, Keith E. Stevens is boyishly charming, but shows only a hint of the smoldering menace that should make his character so compelling. (Imagine Steve McQueen as played by Matthew Broderick.) In a similar vein, Constance Thackaberry is a languidly pleasant Madge, but we never feel the intense yearning she describes as she tries to overcome her physical beauty and be seen as a whole person. Instead of Madge being drawn inexorably toward Hal's irresistible flame, their coupling seems more like an arranged affair, distant and dispassionate. Scott Esposito does a bit better as the two-timed Alan, although his hand-to-hand fight with Hal is not as spontaneously physical as Rosemary's libidinous dance with the magnetic drifter.

While Inge does get off some clever lines (Millie, on her sister's lack of smarts: "They had to practically burn down the schoolhouse to get her out of it!"), the play is notable for its ordinary speech and lack of pretension. This is an admirable style that would work convincingly -- and would leave a more lasting impression -- if the core conflict set off more sparks. As it is, this is a Picnic in a lovely setting, with delicious side salads and condiments, but a main course of squishy fried chicken.