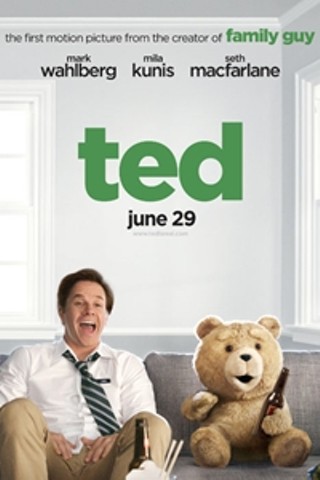 Ted is just one bong hit removed from last year's Paul, the movie about a foul-mouthed, pot-smoking alien who makes life hell for a pair of hapless fanboys. This time it's a foul-mouthed, pot-smoking teddy bear who makes life hell for his lifelong pal John (played by Mark Wahlberg, who really isn't cut out for comedy). The first feature directed and co-written by Seth MacFarlane (who also voices Ted) has a lot in common with MacFarlane's TV show Family Guy, especially when it comes to stretching jokes to their breaking points. It's also often hilarious. Years ago, young and friendless John makes a Christmas wish: He wants his new teddy bear to be real. And through some holiday magic, the toy comes to life, becomes a temporary celebrity, and, 25 years later, hangs around John's apartment all day watching bad movies and getting high ... until John's girlfriend (a very game Mila Kunis) thinks it's time for Ted to live on his own. Funny, offensive, stupid, and sentimental, Ted bears all of MacFarlane's hallmarks, complete with gay jokes, racist jokes, dick jokes, and fart jokes. You know what you're getting with this one.
By Michael Gallucci

Ted is not showing in any theaters in the area.