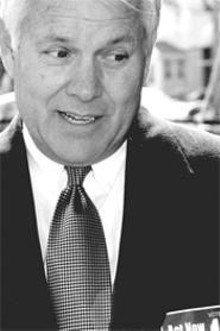 From Autumn to Ashes Agora Ballroom Sunday, August 14
Akron Mayor-for-Life Don Plusquellic is an earthy, old-school pol who's not exactly on a first-name basis with the Queen's English, which may explain his popularity. But Plusquellic's linguistic flair seems to have gotten the best of him.

On a recent evening in the Rubber City, Plusquellic parked his car in a lot used by Main Street restaurants. A valet made the mistake of asking him to repark it, noting that the mayor was taking up too much space. Plusquellic responded by tongue-lashing the young man, asking whether he knew "who the fuck he was," according to witnesses. When the attendant said no, Plusquellic responded, "I own this fucking city."

The following week, the young man was fired.

After Akronites caught wind of Plusquellic's most recent act of intimidation, the mayor's office was greeted with a barrage of complaints.

And if he owns the city, there's no good excuse why he didn't get the valet rehired.

Sweet vindication
Around Cleveland City Hall, no one's exactly thrilled about allegations that former Mayor Mike White traded contracts like a vendor at a Tijuana swap meet ["City for Sale," July 20]. But if you catch a little grin on the face of Councilman Mike Polensek, don't hold it against him.

For years, Polensek took heat for being too critical of White. When the Collinwood councilman overthrew Jay Westbrook as council president in 1999, labeling him the "the mayor's guy," The Plain Dealer wrote that Polensek "lacks White's vision." Apparently, the councilman didn't see federal prison in his future.

"The arrows were flying," Polensek says. "In fact, I've still got a couple of these arrows sticking out of my ass."

Now, however, he feels "totally vindicated . . . The Plain Dealer ought to be cringing . . . They tried to paint us as obstructionists. We were asking too many questions . . . It's funny now, how all of a sudden they have lockjaw. They haven't talked to me at all. What am I gonna say? 'I told you so?'"

It's your party, councilman. We're just here for the beer.

Duking it out
An East Cleveland crime-fighting group recently tried a new approach to accomplish its goals: violence.

Last month, East Cleveland City Council voted to raze an abandoned building at Euclid and Page. There was just one problem: One of its walls was a memorial to young homicide victims.

Black on Black Crime Inc. -- which, lest there be any confusion, is opposed to black on black crime -- wanted to preserve the memorial by converting the building into a community center. But city council wouldn't bite.

This angered group spokesman Art McKoy. He was especially peeved at Councilman Gary Norton, who he "thought was a friend."

It "was like a slap in the face and a stab in the back to me," McKoy said, before running out of metaphors to mix. "I'd like to take out my frustrations on him."

So McKoy challenged Norton to a boxing match. He proposed holding it, appropriately enough, at the city's annual Love Fest in Forest Hills Park.

But Norton wouldn't take the bait. "That's not me," says the councilman, noting that he weighs 150 pounds "sopping wet."

"I'm more of a spelling-bee kind of guy," he adds.

Fight the power
America had a lot of swell reasons for the Iraq war. Pursuing democracy. Going retro with a new round of colonialism. Or finding another country to blow up, since Afghanistan wasn't fun anymore.

At the very least, we'd be conquering an oil-rich country, thus creating a satellite version of Texas -- without having to deal with any additional Texans.

But despite our sending almost 2,000 people to their deaths, gas prices have ballooned.

Now ClevelandGasPrices.com is fighting back. The site lists the 15 service stations in the Cleveland area selling the cheapest gas over the last 48 hours. And if you're into boycotts, it also lists the most expensive.

Last week, the BP by I-90 on West 117th was the best bet in town ($2.25 a gallon). Meanwhile, the Enemy of the State Award goes to the Shell on Dover Road in Westlake, which topped the list at $2.59 a gallon. North Olmsted appears to be the Bermuda Triangle of motoring; the city has more high-priced stations than any other.

The site is interactive, allowing drivers to report price changes in their neighborhoods as well as flame those stations working in concert with Satan. Wrote one person of a Marathon on Wallings: "Just because of your greed, I will never go to your gas station. Well, maybe if I have to take a leak . . ."

Take that, Jennings!
Peter Jennings' fight with lung cancer may be over, but Sam Fulwood isn't through with him. Last week, The Plain Dealer columnist chided his paper for overcovering the ABC anchor's death, while barely mentioning the passing of a "more influential journalist" -- John H. Johnson, founder of Ebony.

"While Jennings was an important news reader, his contributions in the reporting and business of journalism pale in comparison to Johnson's," wrote Fulwood.

In June, Trivisonno angered AIDS activists when he ranted that he would never dine at a restaurant if he knew the food was prepared by someone with HIV and that infected workers should be forced to identify themselves. (He wanted them to wear a scarlet letter or a Star of David armband, but those designs were already taken.)

After the dust-up, execs from Clear Channel, which owns WTAM, met with the AIDS Taskforce of Greater Cleveland to clear the air. Regional Vice President of Programming Kevin Metheny agreed to sign on as a sponsor of this year's AIDS Walk and help promote it with news segments on WTAM and KISS.

Trivisonno was invited to attend the walk, but he was in California stalking Carmen Policy, still hoping to have his baby.