"We've got to get these apartments done," Graham Veysey is saying, walking the length of the Schaefer Building's third floor. "Right now, there's not a lot of there there." 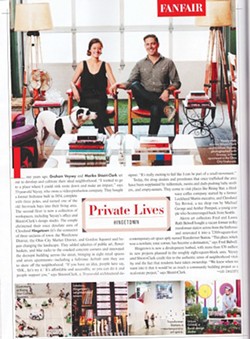 He's not kidding. The empty second and third floors look like something out of Saw. They're dusty and dark and littered with printing company antiques: typewriters and boxes of metal letterpress type. But when complete, with new windows and snappy interiors, these six units figure to be hot commodities. Among other assets, they're exactly one mile from Public Square, less than a mile from the Happy Dog, and a short walk to the Market District. It's on the near-westside's proverbial hinge.

"Then the lot," says Graham, "which is an exciting opportunity, we'll be able to dive deep into 'What is that?' And it'll also be right around the time that Rick Foran and Chris Smythe's [West 25th Street Lofts] project is coming on board."

Graham and Marika walk to the roof of the building that will soon be theirs, both jacketed against the November wind. Marika carries a Mason jar with a coffee-cup lid. Graham gazes out and down. In every direction, he can point to an imminent residential project cropping up on this, the north end of Ohio City.

"You've got 83 units there," Graham says, gesturing to the forthcoming lofts on Church Avenue between West 25th and West 28th. "You've got 250 units right there."

"Snavely," Marika elaborates, referencing Peter Snavely's Chagrin Falls-based construction company. They're set to break ground in early 2016 on their 'superblock' on the northwest corner of West 25th and Detroit — currently a vacant lot — which is also the proposed new site for the Music Settlement. "Thirty or 40 will be affordable units, above Massimo da Milano [across the street]."

"Then you've got Mariner's Watch," says Graham, pointing west on Detroit. "Which is 64 units. And that's fully occupied. Then on the other side of that, you've got the Vintage Project, which is the Marous Brothers — the actual brothers. They're building a six-story building with 60-plus units."

And directly across Detroit, of course, is the Federal Knitting Mills Building, 66 "authentically redeveloped," "industrial-chic" lofts, which have been on-line and in-demand for years.

"When you add all those up," says Graham, "it's more than 500. There's no place in Cleveland, other than the downtown core and University Circle, that's seen the urban density that we're seeing in this immediate area."

Graham is quick to point out, however, that almost all of these properties are redevelopments of vacant buildings or lots. They fit into Ohio City Inc.'s strategic plan to prevent the further cannibalization of the interior neighborhood's historic housing stock. There's plenty of room for growth, academics and developers say, and Veysey and Shioiri-Clark are eager to continue being a part of it. But they're also particular about the way they present themselves, anxious to be viewed not as real estate developers or gentrifiers, but as "responsible redevelopers" and "community builders."

Iterations of Graham and Marika's story have been repeated — to the extent that Hingetown's story has been repeated — in the pages of local and national publications. It goes something like this: A boomeranger and a frisbee — Graham, a University School alum, is originally from Shaker Heights; Marika's from Berkeley, California — both of them young, white, college-educated and terribly fashionable, have created a trendy sub-neighborhood out of thin air. (Correction: Marika is half Japanese and a Japanese citizen). And, go figure, their hearts seem to be in the vicinity of the right place. They don't just want profits, they want to establish roots. Since the arrival of their projects, the prostitutes and drug traffickers who had imperiled the local environs are no more, and the businesses and the residents and the weekend tourists are all more or less equally pleased about the spirit of collaboration and innovation that now abides. And have we mentioned the amenities?

Graham, targeted by a realtor for his "OHCITY" license plates, bought the old firehouse on the corner of Church and West 29th Street four years ago and converted it to a live-work space. Rising Star Coffee and Urban Orchid are now anchor retail tenants on the first floor. Graham's video production company and Marika's design studio are on the second.

Then, with backing from Fred Bidwell — the modern art collector and force behind Transformer Station, soon to be a Hingetown resident himself — Graham and Marika bought the Striebinger Block building on Detroit and West 29th.

"The building was about to go into foreclosure," Marika told me. "It was owned by this predatory lending company in L.A. and if we hadn't bought it, I'm positive they would've torn it down and turned it into a Wendy's or something."

In short order, they beefed up the intersection's "programmatic side" — Ohio City Stages, the Cleveland Museum of Art's weekly summer concert series; the Hingetown Hoedown, a bluegrass music festival; the Hingetown Hygge; and the Cleveland Flea's Sunday Market — and solidified the Hingetown brand: logo, signage, website, the whole deal. There was vibrancy in the air.

"It's one of the things we've talked about from the beginning," Marika said. "How to responsibly redevelop by filling in the missing teeth between these pockets of vibrancy [West Side Market, Gordon Square, etc.], to kind of knit together a larger, more vibrant near-westside."

The headlines have practically written themselves: "Can One Young Guy Lift Cleveland Out of its Misery (No, Not LeBron James)"; "How One Young Couple Turned a Toxic Corner of Cleveland into a Development Hotbed"; "How One Young Couple Led the Renaissance of a Cleveland Neighborhood"; "Welcome to Newly Revitalized Hingetown, Cleveland's Latest Hot Spot." (It's the favorable coverage that Bill Merriman was alluding to.)

But Graham told me in our first phone conversation that he's been uneasy with the some of the coverage, and of being painted as a sort of savior.

"I didn't write those headlines," he said. "And there's an element of trying to get people to click. I shouldn't be blamed for what an objective editor or digital editor puts in a headline. I mean, have you ever had a headline written by any of your subjects?"

Graham said that any good piece of journalism about Hingetown should strive to be a "holistic narrative" that talks about "the Bill Merrimans," and, among other things, the residents of Lakeview Terrace public housing on the other side of Detroit Avenue.

"All I can do is talk about my first-hand accounts and celebrate the social justice history of this community," Graham said. He referenced his and Marika's work with Station Hope and Cleveland Public Theatre (where they are both board members), and said that when he speaks with reporters, he often tries to talk about poverty issues and urban policy — Graham was, in fact, recently appointed to Policy Matters Ohio's board of directors — but that reporters, almost without fail, end up writing stories about him and Marika instead.

"I don't know if it's better to just not call attention to what I think is a beautiful thing [Hingetown], this amazing collaboration, or stay silent. But I don't write any of these articles."

Graham Veysey certainly did not write "My Issue with Hingetown," a harshly worded screed written by neighborhood resident Ben Hess in the aftermath of the Vanity Fair piece.

"Graham Veysey is a pompous piece of shit," Hess wrote (not what you'd call burying his lede), "and any lasting impact he's had on the Ohio City area is far more toxic than anything that was happening on West 29th before he branded it 'Hingetown.'"

Hess has lived next door to Bill Merriman on Church Avenue for most of his life. He's 24 now — a Benedictine alum who spent time at both Ohio University and Cleveland State — and works at the Capitol Theatre in Gordon Square. While he cares deeply about the neighborhood in which he lives, you wouldn't confuse him for a neighborhood spokesman. He told me over coffee that he's never been particularly active with or vocal about community issues. Still, he said, the sentiments expressed in his blog post had been simmering for some time, and the Vanity Fair coverage, (and the Plain Dealer's coverage of the coverage), was "the straw that broke the camel's back." He said that whether or not Graham claimed to be seeking credit for the neighborhood, the unmistakable impression from the articles was that it's credit he was owed.

"Graham is so far up his own ass that he can't even fathom the idea that maybe there was a thriving, inclusive community that has existed on the near-westside of Cleveland long before he was born, and that his ideals help no one outside of his elitist posse," Hess wrote in the post. "Graham, in action, is building barriers and lengthening the divide between classes in a city that is far too segregated as is, and is shutting down anyone and everyone working to ensure people of all different backgrounds can live peacefully together."

Hess acknowledged that his post was hostile, and that the name-calling was a "low blow" (though he rolled his eyes at Graham, in an email, calling him a "cyber bully"). He even published a sanitized "Radio Edit" when he learned his post was being widely shared, and recognized that the language discredited the contents for a lot of readers. But he stood by the aggression in principle:

"When [Graham] insults my neighborhood and the people I love," he wrote, "all that I have left to do is stoop to his low; to sling insults." (FWIW: It was Fred Bidwell, not Veysey, to whom the "nowhere, toxic corner" quote was attributed in Vanity Fair).

For his part, Graham sees little profit in talking about what Hess wrote, classifying the post as angry, hurtful, cyber- bullying, "with about as much value as a reader comment on Scene or Cleveland.com."

That said, both parties are trying to meet. Their schedules have been uncooperative thus far, and even if they do get together, neither seems to be anticipating an especially productive conversation about the future of the neighborhood.