Send a News Tip
I Spy 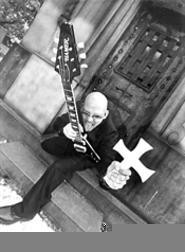 Michael Kolar's living room looks like hell's Barnes & Noble. On wooden bookshelves that span an entire wall, there's more than 500 creepy tomes, with such titles as The Anatomy of Human Destructiveness, Blood Curdling Tales of Horror and the Macabre, and -- perhaps most unnerving -- Delta Style, the autobiography of husky actress Delta Burke.

As we browse through the stacks, Kolar's eyes gleam behind rose-tinted glasses. Combined with his shaven head, the giant scorpion tattoo on his neck, and his small, sinewy frame, the 35-year-old guitarist looks appropriately sinister, like a little hobgoblin. A well-read little hobgoblin.

"When I was in the fourth grade, that's when I got exposed to Randy Rhoads and Ozzy with Blizzard of Ozz," Kolar recalls of his initial gateway into the dark arts and the works of notorious sorcerer Aleister Crowley. "Because of the song 'Mr. Crowley,' I got my first edition of Magic in Theory and Practice. I've been building my collection ever since."

Kolar then hands us the jewel of his library. It's a short script, with the rather shocking image on the cover of a woman getting her throat slashed. Its title, The Grand Guignol, refers to the infamous turn-of-the-century Parisian shock-theater company. Kolar wrote it himself.

"I want to be a horror icon," he tells us, and The Grand Guignol is one means to that end. The other is his dark, neoclassical guitar playing, which recalls the fire-and-brimstone virtuosity of Swede Yngwie Malmsteen. Combined, the two form the gory stage show Horror Rock, which Kolar describes as the "Trans-Siberian Orchestra meets Friday the 13th." On his website, Kolar boasts that performances are rife with "Tortures and Mutilations. Stabbings and Gougings. Demonstrated Live! Before your very eyes!"

This is not a show for the kiddies. The Grand Guignol revolves around the slaying of women accused of practicing witchcraft and the violent revenge they seek (after death) on their religious persecutors. There's lots of death, sex, and uh, talk of how "torchlit snatches were licked."

"We went through 38 actors," Kolar says, discussing the difficulty of finding folks willing to perform such graphic material. "There was even a stripper from the Crazy Horse who was going to play the lead witch, but because of the content, she dropped out."

Nevertheless, the show managed to debut at the Bottom Line Saloon over the summer. The audience response was predictably heated.

"There were people who had to just leave," Kolar says. "[They] could not believe that they were seeing something like this in full view. It's almost like 'How dare you do that!'"

In truth, though, the show is more fun than frightening. It serves much the same purpose as an over-the-top splatterfest like Dawn of the Dead: a way for its audience to revel vicariously in a violence that, with a lesser degree of severity, may have been directed at them.

"Have you seen the movie Trick or Treat?" Kolar asks about the cult-classic, heavy-metal horror film in which Eddie, an abused outcast teen, takes revenge against the jocks. "I identified heavily with that film," he recalls. "Being small and not very athletic, and getting picked on."

Kolar escaped into horror films and larger-than-life rock and roll. And now he's looking to lead a rebirth of both. "I'm trying to make something tangible of this idea that Kiss and Alice Cooper originally had," he explains, "which is that, look, when you go and see a show, you don't want to be bored. It's getting boring to see a band just stand there and play. I want people to actually walk away feeling like 'This guy did something to really entertain me.'"

On that level, Kolar's Horror Rock is a stomach-turning success. However, whether the show finds an audience remains to be seen.

"I think that my greatest fear is that once I'm dead, people will forget who I am," he says.

With the stab-happy Grand Guignol, we think it's safe to say that Kolar will eventually rest in pieces.