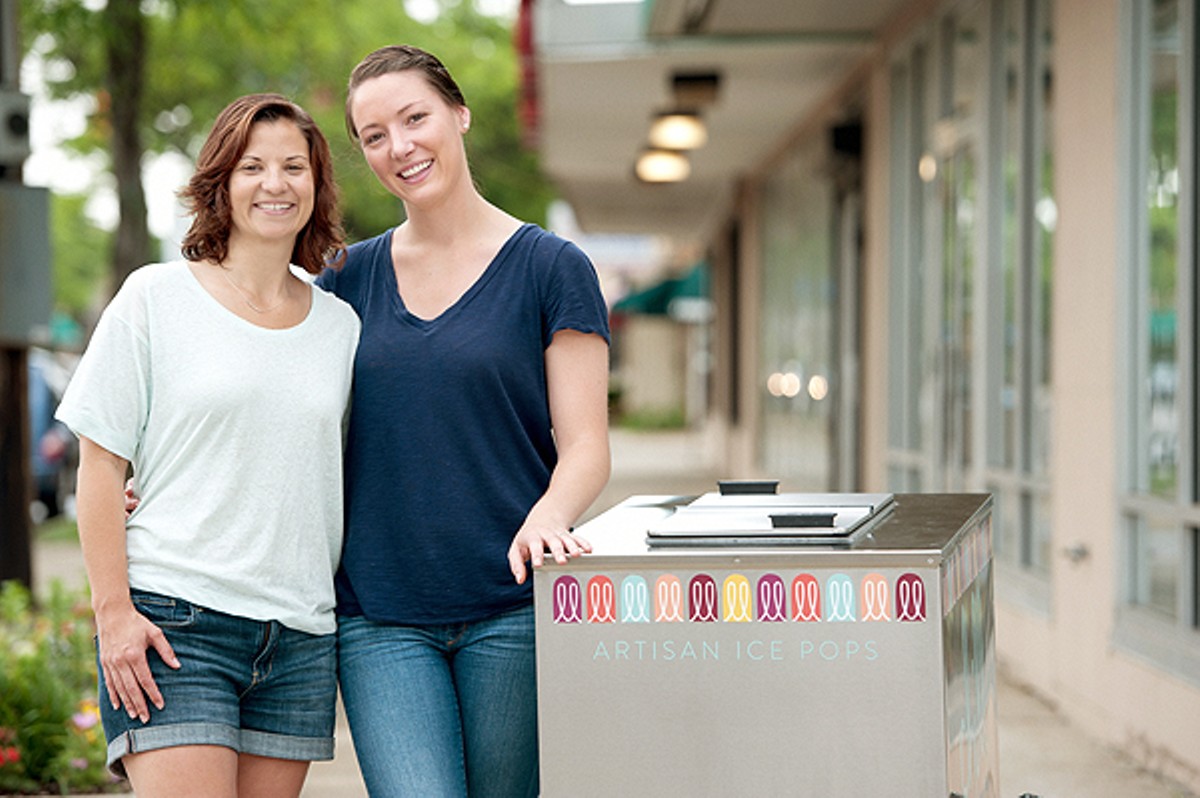 Elizabeth Pryor looks young, slightly tanned and physically fit. Her wife, Maggie, is an amateur triathlete, and both women are certified yoga instructors, though they "never really had the time to get into it," what with the new business and all.

"I think a lot of our personality comes through in the business," Elizabeth says of their mutual interests in nutrition and exercise. Chill Pop's bright, bouncy logo definitely hints at the Pryors' playfulness, and their personal commitment to supporting food "made with integrity" is evident in their products.

Some are surprised that, given their bent toward wellness, the two make frozen desserts.

"Even for Type-A personalities, which I think sometimes we fall into, you have to realize that there needs to be balance, there needs to be moderation," Elizabeth explains. "So while it's important to have that knowledge about food and how it's produced and made, it's there to be enjoyed."

Just like the rest of the city's twenty- to thirty-somethings, Elizabeth and Maggie brunch on the weekends, catch a spinning or yoga class when they're able, like to explore the city's food scene and spend down time hanging out with friends and family. "There's so much to do in Cleveland," Elizabeth says.

They almost left it all for good.

“That’s part of our coming-back-to-Cleveland story,” says Elizabeth. The Pryors originally met in Cleveland but didn’t connect as a couple until Maggie had moved to Columbus for school. They moved in together and lived there for several years, where they were “big aficionados of Jeni’s ice cream.”

Though Elizabeth says she was always drawn to come back home, Maggie was a harder sell. As with a lot of marriages, it was family that helped to convince her.

"She's so much a part of my family from the start that she started to look forward to [moving back], and then Cleveland was no longer associated with any of that." So they moved north again, and as Maggie settled into her job as a respiratory therapist at Rainbow Babies & Children's Hospital, Elizabeth brainstormed ideas for her own business.

Chill Pop, Elizabeth claims, "kind of came out of nowhere." She recalls coming across a recipe on Pinterest one day. "It was a gourmet popsicle, and I was like, 'It's like Jeni's but on a stick.'"

This summer has been a whirlwind. "We launched the business, bought a van, leased a new [kitchen] space and bought a house all at the same time," Elizabeth says.

"I say making a popsicle is pretty easy, and standing there selling it seems pretty easy," says Elizabeth. "But the logistics of having a frozen product and getting it all over town is incredibly stressful."

Still, it seems as though they manage the stress of living and working together pretty well. Thanks to Maggie's worrying, they always have enough dry ice on hand to avoid meltdowns, and "when there's tension, we bounce back pretty quick," she says.

Chill Pop's flavors rotate regularly, but just pick one. "If I had a dollar for every time someone asked me 'What's your favorite flavor?' I wouldn't even need to be in the business of making popsicles," Elizabeth laughs.