The King Is Dense

There's more to Stephen King's Dreamcatcher than will fit in its confusing cinematic adaptation.

Send a News Tip
Dreamcatcher Accompanied by "The Final Flight of the Osiris"
Directed by Andy Jones. Written by Andy and Larry Wachowski. 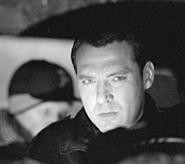 Tom Sizemore is shifty military man Owen Underhill.
Lawrence Kasdan directs and co-writes Dreamcatcher, the latest addition to the Stephen King adaptation genre, currently at 74, including film and TV, and counting. Taking the Internet Movie Database as a source, this puts King handily ahead of Michael Crichton (23) and Bram Stoker (38), closing in on Dame Agatha Christie (77), still a lifetime away from Dickens (168), and several lifetimes from Shakespeare (499).

Kasdan generates more suspense than scares -- the two are related but not identical -- and his only partial success with the material has a lot to do with some of King's particular techniques of story construction. That is, in his longer novels -- and Dreamcatcher runs 900-plus pages in paperback -- King often packs in more essential plot material than can be accommodated in a feature of commercially viable length. Condensing, paring, and shorthanding the story elements can be daunting, and despite the efforts of Kasdan and William Goldman -- two masters at wrangling unwieldy source material into shape -- there is some awkwardness and confusion in the result.

The opening 10 minutes or so deftly let us in on some of the setup: We meet, one at a time, four longtime buddies who have some cleverly (if not clearly) revealed abilities. They are all seemingly telepathic: Henry (Thomas Jane), a suicidal psychiatrist; Jonesy (Damian Lewis), a teacher; Beaver (Jason Lee), a carpenter; and Pete (Timothy Olyphant), a car salesman. Pete also has a psychic knack for finding things, Beaver is maybe precognitive, and Jonesy has an amazing memory.

The delineation of their powers is probably crystal-clear to those who have read the book, including Kasdan and Goldman, who have presumably spent so much time with it that they don't realize it's not so crystal-clear to the uninitiated. Are all four telepathic in general? Or are they just all in contact with each other, with Henry the only full-fledged mind reader? If they're all mind readers, what are the limits, distance and otherwise? Why do they seemingly fail to perceive outsiders' thoughts at crucial moments?

This isn't really nitpicking, because the suspense is constructed on a foundation of these facts, and this foundation is a bit muddy where it should be concrete.

In any case, the four convene for their annual retreat into the woods at a remote cabin near where they grew up in Derry, Maine. They make initially vague references to a fifth very special friend, Duddits (Donnie Wahlberg), who is at the center of their bond and of their powers; a metaphorical dreamcatcher, if you like. Some of this is explained in a childhood flashback very early in the film, with a second flashback later on explaining more.

This would be enough mystery for most writers, but not for King. Soon -- in what may or may not be a related development -- the cabin and most of the countryside are overrun by squiggly, wormlike alien larvae that can develop into huge phallic-vagina dentata combo-platter creatures. These creatures are independent organisms some of the time, body-inhabiting mental entities other times, and apparent shape shifters yet other times -- depending on what the plot and the shock effects call for at the moment.

Maybe this is all very clear in the book, but it's not the least bit clear in the film, even if you're really paying attention.

Even that's still not enough plot for King, so he then brings in a military thread to juice things up even more. Colonel Abe Curtis (Morgan Freeman) is the top dog in a secret task force that has been battling these alien invaders for decades. He's about to turn the reins over to his protégé, Owen Underhill (Tom Sizemore), but the methods of cleaning up this current Maine infestation may drive them apart.

The film's point of view leaps around from character to character, though Jonesy gets the most screen time, in no small part because his character has the most visually interesting quirk: His memories are stored in a warehouse in his brain, an area the camera actually visits and which is occupied by an internal Jonesy avatar. (The design of this set is really the film's most memorable element.)

Despite all these expositional problems, Kasdan manages to make the film's two and a quarter hours fly by pretty quickly. The movie's shifting point of view is partly the product of crosscutting between different action threads -- a technique for generating suspense that goes back at least a century (to The Great Train Robbery), if not further. With all the technical advances at a modern filmmaker's disposal, it's still as reliable a strategy as anything that's been developed since.

Speaking of technical advances, Dreamcatcher is accompanied in theaters by the short "The Final Flight of the Osiris," one of the Animatrix films conceived and written by Andy and Larry Wachowski as a supplemental part of the Matrix world. Directed by Andy Jones (one of the animation directors for Final Fantasy: The Spirits Within), this animated work fills in a crucial part of the story between the first Matrix and the upcoming The Matrix Reloaded. The title alone is a bit of a spoiler.

"The Final Flight of the Osiris" is a swift, exciting 11 minutes. It also is a demonstration of just how close computer animation is getting to generating completely believable virtual actors: At moments, the technique is so good, you're almost sure they've snuck in live-action footage. The rest of the time, the characters look slightly too smooth, as though they frequent Michael Jackson's fleet of plastic surgeons -- or similar, superior doctors, since they look more real than Jacko.