'The Land' is a Gnarly Ode to Cleveland

Beasts of the Rust Belt Wild 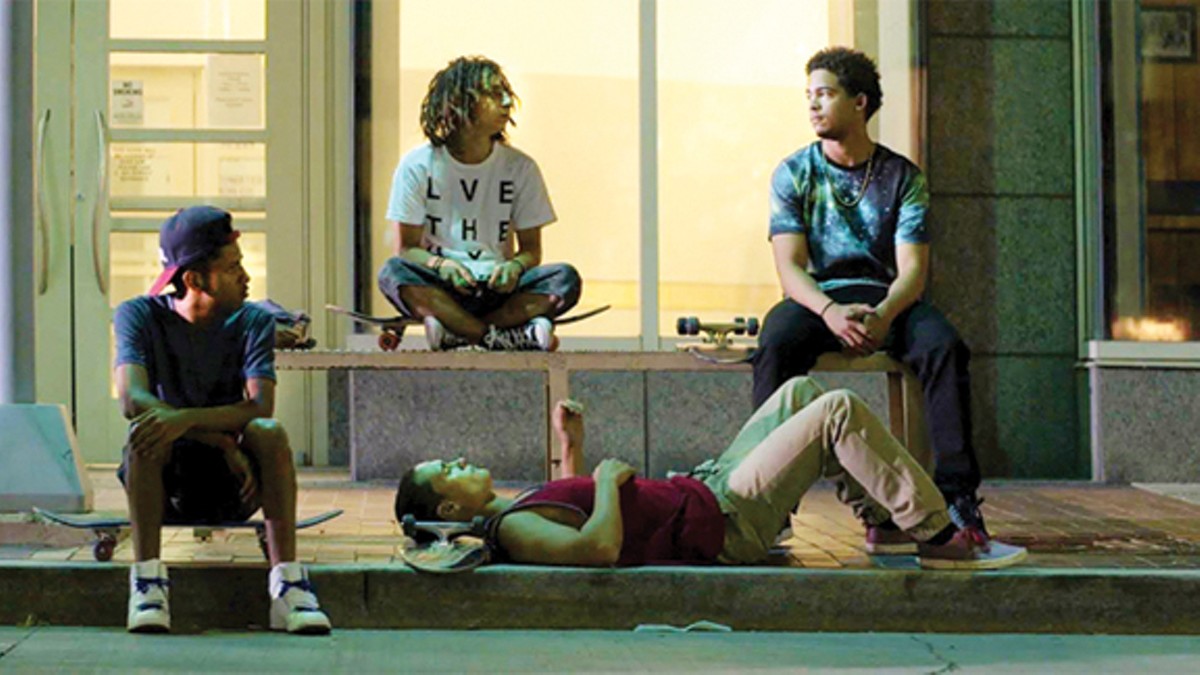 When The Land director Steven Caple Jr. spoke with Scene earlier this summer, he said that his debut feature film, a Sundance darling that opens at the Cedar Lee on Friday, shouldn't be considered "just another gritty 'hood film." It's an ode to the Cleveland he grew up in — a city with all the signposts of Rust Belt decay, sure, but also a city that doubles as a playground for the teenage skateboarders at the movie's core.

Cisco (Jorge Lendeborg Jr.), Junior (Moises Arias), Boobie (Ezri Walker) and Patty Cake (Rafi Gavron) are high-schoolers who don't see much profit in school. An opening montage introduces us to them via a faceless guidance counselor, lamenting their truancy and apparent lack of ambition. But these kids are not without goals: They want to get sponsored for regional skateboarding competitions and eventually go pro. To finance this dream — they need demo tapes, new equipment, threads of adequate dopeness — they hijack old cars and sell them to a shady chop shop. But when they discover a duffel bag full of pills in an Oldsmobile's trunk, they turn to small-time drug dealing to get rich quick.

Only slowly do they realize that the pills they thought would be their ticket out of town are in fact just the opposite. A local queen-pin (Linda Emond), a Kathy Bates-ish crime boss who runs a stand at the West Side Market, wants her pills back and dispatches one of her minions, a biker-thug named Elliott (Cleveland native Robert Hunter), to exact vengeance on the streets. But Elliott goes too far, terrorizing those who would cross Momma and wreaking havoc on the lives of our starry-eyed, criminally hapless quartet.

A Welcome to Collinwood for Cleveland's next up-and-coming filmmaker, this unique crime drama celebrates the physical landscape of Cleveland more than any film ever has. In an effort to capture the energy and poetry of the streets, Caple and his cinematographer Steven Holleran pack the movie with slow-motion sequences of skateboarding in warehouses and the old abandoned Max Hayes High School. They stage scenes on rooftops or near windows so the downtown skyline is prominent in the background. The city is on full and vivid display.

But life is by no means glamorized: Junior lives in the projects (the CMHA housing complex north of Hingetown). Cisco lives above the Old Fashioned Hot Dogs on Lorain with his Uncle Steve (Sons of Anarchy's Kim Coates) who runs the place alongside a mournful prostitute named Turquoise (Erykah Badu). Boobie and his blue-collar father (The Wire's Michael Kenneth Williams) live in a modest apartment, and Patty Cake, a teen parent, uses his scant funds for diapers and a high-chair for his toddler at home.

Caple has said he's interested in stories that explore humanity's "dark edge," and that narrative interest is reinforced by the film's look. Much of the action transpires at night; even the daytime shots are often consumed by shadow.

In the end, it's a crowded, collision-course story that doesn't quite deliver on the criminal side. The drug operation is painted in broad strokes, and it's breeched by a number of forgettable characters whose relationships to principal characters are sometimes unclear. The maternal market vendor who runs drugs on the side is a killer idea — though not fully original — and in keeping with Caple's concept of Cleveland as a corrective to racial and social stereotypes, but Momma is an unconvincing drug lord.

That said, the teens who dominate the story triumph in their scenes of reckless behavior and boyhood glee. And in any case, most Clevelanders will venture to the Cedar Lee because of the local connection, and on that score they won't be disappointed. As both celebration and captain's log, The Land feels truer and richer than other films that have envisioned Cleveland as an arbitrary sad-sack backdrop.

Because of strikingly similar career trajectories, Steven Caple Jr. has been compared often to his friend and mentor Ryan Coogler, who wowed with Fruitvale Station in 2009 and (again with Michael B. Jordan) Creed last year. But The Land feels equally of a piece with Benh Zietlin's 2012 debut Beasts of the Southern Wild, which sought to evoke a region (in that film, the Louisiana bayou) in a new and wonderful light.