The Legend Lives On

The burgers remain the reason why you should go to Heck's. 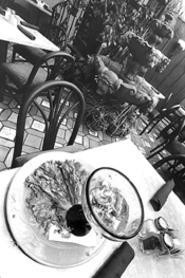 Walter Novak
The garden room at Heck's, now moderately defoliated.
When Heck's Café opened in Ohio City in the early 1970s, its innovative menu of gourmet burgers and its youthful, casual attitude signaled the start of a modest culinary revolution among incipient foodies grown increasingly disdainful of their parents' stodgy eateries. Founder John Saile's little burger empire, in fact, at one time stretched from Rocky River to Woodmere, and long-haired college kids and young professionals gladly stood in line for a chance to chow down on big, juicy burgers in friendly dining rooms sprouting Tiffany-style lampshades and billowing ferns.

Of course, times have changed. Places like Our Gang, Earth by April, and the other trendy hotspots of those days have faded into well-fed memory, while Cleveland's dining scene has grown ever broader and more sophisticated. Heck's suburban outposts are long gone now, and even the original Ohio City location has taken a few hits. Ownership has changed. The interior was ravaged by a 1998 fire, which shut down business for almost a year. And then there was last summer's labor shortage, which forced a brief but well-publicized hiatus.

Yet through it all, Heck's, with its thick burgers and pleasant location on an increasingly gentrified street corner, has continued to attract a loyal following. And while it has once again changed hands, its newest owners, Mike Weigand and Jeff Eisenberg (former owners of Tremont's Hi and Dry), say they want nothing more radical than to "let Heck's be Heck's."

As a result, this most recent change in ownership may not even be apparent to a casual observer. The cozy interior, given a thorough remodeling after the fire, remains much as it was, with its floral wallpaper, wide oak moldings, and the world's tiniest bar, a four-seat wonder with a view onto Bridge Avenue. Two small dining areas hold a grand total of four tables and three comfortable-looking booths; a handful of shady sidewalk tables provide an alfresco option in nice weather. But the heart of the restaurant (and most of the seating) is in the porch-like garden room, an airy space with tiled floors, newly painted walls, and a translucent ceiling that lets in softly diffused natural light. Weigand admits that his major interior renovation thus far has been to machete down much of the room's foliage, a tangle of overgrown vines that seemed to threaten to swallow up the tables like kudzu on an Alabama outhouse. Besides making the room feel more spacious, the pruning has also helped focus attention on an ornate wrought-iron staircase spiraling upward toward the second floor, a recently installed fountain, and a striking cobalt-blue room divider, hung with vases of fresh sunflowers. In this bright and summery room, colorful Fiesta dinnerware and blue cloth napkins are both fitting and fun.

Menu changes thus far have likewise been fairly modest, and plenty of old favorites still hold their own. The Magnolia Chicken Salad, for instance, with tender chunks of breast meat, walnuts, sliced mushrooms, and mandarin orange segments in a thick and fruity apricot dressing, remains generously sized and refreshing. We skipped the popular breaded and fried Artichoke Hearts Alouette this time around, but enjoyed a large-enough-to-share brie and fruit platter: a round of warmed cheese, prettily arranged with thinly sliced apple, mandarin orange segments, sliced almonds, and berries, served with slices of undistinguished French-type bread. Traditional French onion soup had a richly flavored broth, despite appearing a little light on the caramelized onions. And we liked the warm sautéed shrimp in a thick, slightly peppery Cajun-style tomato sauce, although we are getting mighty tired of kitchens -- not just here, but throughout the city -- that force us to fiddle around with slippery shrimp in order to remove their tail shells before we scarf them down. (In contrast, one is generally not forced to peel one's own banana when ordering bananas Foster, or to trim one's own beef when enjoying a stew. If there's a good reason why kitchens shouldn't finish peeling their shrimp before throwing them into a saucy dish, I'd surely like to hear it.)

As for the legendary burgers, our favorites have survived unscathed: the seriously smothered Rocky River Burger, with sautéed mushrooms, thickly sliced bacon, Swiss cheese, and sour cream; the sweet and saucy Teriyaki Burger, with grilled onion and pineapple; and the tongue-tingling Burger au Poivre, with crushed black peppercorns, grilled onion, Worcestershire sauce, and sour cream, among others. While the prices have crept up a bit over the years, today's burgers are better than ever, served on exceptionally tender hand-knotted rolls and sided by mounds of superlative freshly cut french fries.

Besides the burgers and related tuna, chicken, portobello, and roast beef sandwiches, Executive Chef Michele Billy's menu includes a host of newly developed, moderately priced entrées, all of which come with that average French bread and a delightfully gussied-up house salad, piqued with crumbled blue cheese, dried cherries, walnuts, red onion, and tomato. Both the house-made herbed vinaigrette and the house-made ginger vinaigrette dressings were surprisingly delicate and well balanced, and made tasty counterpoints to the out-of-the-ordinary side salads.

As with the rest of the menu, none of the main-course offerings breaks any culinary ground, although most were hearty, full-flavored, and generally well executed. For instance, twin Tournedos Alouette -- the single entrée carried over from the former menu, with two petite beef tenderloins filled with a bit of herbed cream cheese and finished with a flavorful mushroom and red-wine reduction -- were done to a perfect medium-rare and came settled on a lush bed of braised spinach, sided by delectable, subtly seasoned garlic smashed potatoes. Three large slices of citrus-marinated pork loin, also properly done to a tender medium-rare, were well paired with a sweet-tart dab of pineapple-and-orange chutney and a savory blend of wild and white rice. Only our Egg Pappardelle Pasta failed to completely satisfy. While we loved the succulent slices of duck breast, the sun-dried cherries, pine nuts, spinach, and silken cream sauce that bound them all together, the broad noodles themselves were overcooked and starchy; worse, they had glued themselves together in a few places, forming hard, impenetrable boluses that defied both tooth and fork.

To wash down that burger or pork loin, the café offers a modest selection of beers (Old Speckled Hen, Guinness, Heineken, and some Great Lakes brews among them) and a short international list of inexpensive and mainly unremarkable wines, many from Chile, Argentina, and Australia. But we're not complaining: How distinguished a wine do you need to go with pierogi and a cheeseburger, anyway? Besides, Heck's special blend of coffee -- freshly ground and perked up with hints of cinnamon, chicory, and chocolate -- is one beverage that's really worth a taste. And with a bit of sugar and cream, it can easily do double duty as a virtuous low-cal dessert. Otherwise, Heck's finales remain as simple as ever, with the usual daily assortment of cheesecakes, tortes, and cakes provided by Slices, and fountain items, like milk shakes and sundaes, made with Pierre's Ice Cream.

And that's not a complaint, either. I'm right there with Weigand and Eisenberg on this one: Let Heck's be Heck's, and all will be right with the world.