Denmark's favorite son murders and mopes in a fine Hamlet. 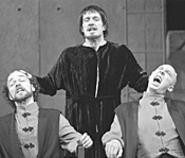 It's Halloween month, so what better time to cozy up with a dandy ghost story, replete with treachery, stabbings, poisonings, madness, and, oddly enough, quite a few laughs. No, it isn't Scary Movie 5; it's none other than Hamlet, now being performed in repertory with Tartuffe at the Great Lakes Theater Festival. This elegantly straightforward production of old Will's most famous tragedy features a number of excellent performances, a startlingly effective minimalist set, and diction-perfect delivery of the Bard's rich language.

But what if you're not a Shakespeare buff? What if you find his Elizabethan language damned near impossible to understand? Indeed, what if you'd rather undergo three hours of gum surgery than spend the same time watching the Prince of Denmark? Well, get a grip. Nobody outside of a doctoral presentation can follow all of Shakespeare's language word for word, but the plot of Hamlet is pretty basic (revenge for a murdered father), so you could probably get the drift even without a word being spoken. But when the words are intoned, you suddenly encounter the real power of the English language, a force not evidenced in the weekly scripts of According to Jim. And here's a tip: Instead of attending a Shakespeare play and expecting to understand every phrase as it's uttered, approach the play as if you were watching a superb word-jazz orchestra. Don't fight it, go with the flow, and you'll discover an exciting way of interacting with the language we casually butcher every day.

Chief among the pleasures of this production is Steve Tague as college-boy Hamlet (given Tague's thirtysomething age, Hamlet is apparently a professional student), who turns in a precisely nuanced performance as the gaunt and black-clad prince. By turns impish and imperious, Tague's Hamlet is consumed with hatred for his uncle, the new King Claudius. That's because Claudius is sitting on the throne with Hamlet's mother, Gertrude (Laura Perrotta), on his lap -- mere weeks after the death of her husband, the king. In short: Dad's dead, mom's playing kissy-face with Uncle Claude, and, to make matters worse, Dad's ghost appears to finger Claudius himself as the assassin. This is clearly more family trauma than Dr. Phil could handle, even in back-to-back episodes, but Shakespeare turns it into eternally quotable commentaries on Hamlet's brink-of-suicide confusion and despair ("To be or not to be . . .") and his diabolical plot to get even.

Of course, any playwright as gifted as our Bill knows that such heavy fare requires some lighter interludes. Enter Polonius, father of Hamlet's best girl, Ophelia (a delicate and affecting Sara M. Bruner), and the strapping Laertes (played with rigid righteousness by David Anthony Smith). As Polonius, Wayne Turney cagily bleeds every laugh from the old man's meandering investigation into Hamlet's apparently psychotic melancholy. The laughter fades, however, when Hamlet stabs the eavesdropping Polonius to death in Gertrude's chamber, sending Ophelia reeling into madness and setting Hamlet and Laertes on their fatally doomed course. Toward the end, the inveterately entertaining Turney returns, poor Yorick's skull in hand, as the comically perceptive gravedigger.

As good as it is, the production occasionally falters because of a couple of unfortunate choices. Hamlet and his close buddy, Horatio, seem an odd pairing, with Scott Plate's open, puppy-dog characterization of Horatio clanging against Tague's brooding Prince. Also, Aled Davies is rather too soft and dweebish for the villainous uncle, never establishing the venomous relationship between himself and his nephew. The very capable Andrew May plays the ghost of the late King, but since his sepulchral voice is fed through an echo chamber, it renders his acting talents moot. Finally, the execution of the climactic sword duel between Hamlet and Laertes, although well choreographed, lacks the spontaneity and rapier-sharp violence that would make it a properly breathtaking dénouement.

Still, Director Charles Fee has created a powerful, no-nonsense Hamlet, without resorting to the sometimes quirky conceptual tweaks of modern dress or arcane interpretations. His vision is buttressed by scenic designer Gage Williams's set, which features a single upstage stone wall, a mystically elevated doorway, and a large, flowing square of fabric that creates waves and ground fog and then disappears in a flash beneath the stage. The feeling of serene simplicity amid the plot line's tumult is enhanced by Star Moxley's rich but restrained costumes.

However, Fee's most admirable achievement is in making Shakespeare's formidable words the real star of the production. His players not only enunciate spectacularly well; they imbue each exchange and soliloquy with the passion and playfulness, the insight and angst that have made Hamlet the most frequently performed play in the world.