The Next Trend in Cleveland Drinks

Is not for the faint of heart 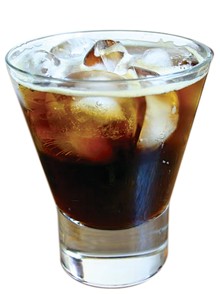 "If you can imagine getting punched squarely in the nose while sucking on a mentholated cough drop," alternative newspaper SF Weekly once noted, "you'll have an idea of Fernet-Branca's indelicate first impressions."

Indeed, there's nothing subtle about Fernet-Branca, an amari (a class of bitter Italian digestifs) that arrives with an effervescent blast of peppermint and myrrh and exits with the extreme puckering bitterness of gentian root and cinchona bark. "It tastes like the perfumed balls of an old Italian man," proffers Greg West, bartender at Tartine Bistro in Rocky River.

Invented by an Italian count in the 1840s using 27 herbs and spices from five continents, the honey-brown liqueur became the national drink of Argentina—where it is commonly taken with Coca-Cola—and thrived on the West Coast of the United States during Prohibition because it was marketed as a stomach medicine. Its popularity there continues: San Francisco alone accounts for 25 percent of the country's Fernet-Branca consumption—they like it as a shot chased by ginger ale—while down the coast in Los Angeles, it is not uncommon to see a bartender pour it directly into someone's mouth.

Its growing popularity aside, Fernet is not for the faint of heart. To saddle up to a cocktail bar and ask for it is to exchange a secret handshake with the bartender, a display of mutual admiration and respect. To bartenders in Seattle, West's hometown, and other big markets, Fernet-Branca is quite literally a badge of honor.

"The military gives out 'challenge coins,' little medallions that have your regiment and service branch on them, and it's become popular for servicemen to whip them out at bars. If you're the last to do it or you left yours at home, you have to buy a round," West explains. "Bartenders do the same thing with Fernet. If you have a good relationship with the Fernet rep in your city they will give you a Fernet-Branca challenge coin. If you're the last person to slam yours down or you haven't sold enough Fernet to get one, you're buying."

If hipster enthusiasm for a beverage that triggers the face you would make changing a diaper on a 7-Up commercial hasn't yet won you over, don't be discouraged: Fernet-Branca is damn delicious. Give it a try, and then give it another try. You'll find, as with many of the things we try to cover in this column, that the act of drinking it is just as enjoyable as the act of having drunk it. "It just explodes with vitality," promises West. "And that's something that no amount of 'pressure-aging' in a lab can recreate."

Add all ingredients and a handful of ice to a mixing glass and stir* for 30 seconds until well chilled.

Strain into a chilled champagne coupe or martini glass. Using a vegetable peeler, cut a swath of orange peel, twist it over the cocktail to express the oils into the drink, garnish with peel and serve.

Where to find Fernet-Branca: