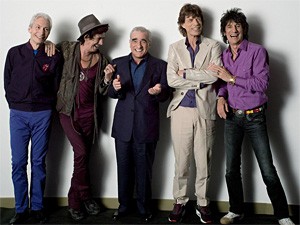 One of the coolest things that can ever happen in a comic book is when two superheroes — like, say, Superman and the Flash, or Spider-Man and the Incredible Hulk — join forces for a one-off adventure. If done right, it will be remembered by fanboys for years to come.

The new concert documentary Shine a Light makes all those super-collaborations look super-lame. It pairs one of the all-time greatest rock bands — the Rolling Stones — with one of the best movie directors ever, Martin Scorsese.

Mick Jagger came up with the idea as the Stones prepared for their mammoth, two-year Bigger Bang Tour, which kicked off in 2005. The concept centered on the veteran band's hugest concert ever — performed in Rio de Janeiro for an audience of more than one million fans. But shooting something that big meant recruiting a filmmaker just as monumental.

Enter Scorsese, who's memorably used the Stones' music in many of his movies. But the Oscar-winning director — hot on the heels of snagging a long-deserved Academy Award for The Departed — reshuffled Jagger's original plan, nixing the arena-sized film and putting the focus on the four guys onstage: Jagger, guitarists Keith Richards and Ronnie Wood, and drummer Charlie Watts. That meant a smaller venue than the one in Rio was needed.

"The Beacon Theatre is special for some reason," says Richards of the N.Y.C. concert hall where the movie was filmed. "It wraps around [you], especially if you're going to play there for more than one night." The Stones ended up performing two packed shows for Scorsese and his Shine a Light crew.

The director is no stranger to music movies. He edited Woodstock and helmed The Last Waltz and the Bob Dylan doc No Direction Home. "I think I'm better suited to try to capture the group on a small stage, more for the intimacy," he says. "The way you see the band work together and work each song."

"The funny thing is that Marty, after looking at all the options, decided that he wanted to make this small, intimate movie, and I said, 'In the end, it's going to be blown up on this huge IMAX thing,'" laughs Jagger. "So the intimate moment is now shown in IMAX." (At some theaters, at least. Others are showing it on regular-sized screens.)

More than 18 cameras were stuffed into the Beacon for the concerts, which doubled as fund-raisers for the Clinton Foundation, an organization centered on global warming among other things. (The former president and his party-nomination-seeking wife show up early in the movie.) "The idea [was] to capture the spontaneity of the group," says Scorsese. "But the word capture means you have to control it. But you can't control spontaneity."

Shine a Light begins with the director desperately trying to pry a set list from Jagger. In the movie, it appears that the concert's songs weren't chosen until the Stones were about to walk onstage. Scorsese admits he fudged the scene a bit. "I actually found out the set list a little earlier than that," he says. "Someone did purloin it. I'm not going to use the word stolen. But we found it."

At 65, Scorsese is about the same age as most of the Stones. He grew up with their music — which is one of the reasons their tunes figure so prominently in so many of his films. Jagger jokes that Shine a Light is the only Scorsese movie not to feature "Gimme Shelter."

"[Their songs] remind me of when I went to see Threepenny Opera back in 1959 or 1960, and how the music affected me and what [the] play was saying," says Scorsese. "The lyrics were so important to me. I found I grew up in an area that was, in a sense, like the [working-class setting of] Threepenny Opera.

"The Rolling Stones' music had a similar effect on me. It dealt with aspects of the life that I was growing up in, that I was associated with or was experiencing and trying to make sense of. It was tougher, had an edge — beautiful and honest and brutal at times. It's always stayed with me and [has] become a well of inspiration to this day."

One of Shine a Light's most inspired bits is the way Scorsese weaves archival news footage from the '60s and '70s into the film's concert scenes. Old-timey reporters query the fresh-faced Stones about how much longer they plan to rock. More than 45 years ago, Jagger was asked whether he could picture himself performing when he's 60. His prescient reply: "Yeah, easily."

Jump to comments (0)
« Dead Meadow makes an L.A. record the classic rock way   |   Ministry calls it quits. But it has one more tour to get through first »