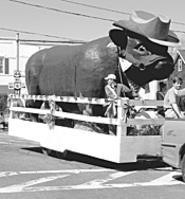 The 75th annual Geauga County Maple Festival kicks off today with bargain rides, a battle of the bands, and the crowning of the fest's queen. Over the next four days, a lumberjack competition, a pair of parades, a pancake-eating contest, bathtub races, and a maple-syrup auction are planned. Live music (by the Vibe, Alex Bevan, and American Steal Band) will be there. So will an arts-and-crafts show and a sap run. All this, plus pancakes in the park! The fest runs through Sunday at Chardon Square (off Route 44) in Chardon. Hours are noon to 10 p.m. today, 10 a.m. to 11 p.m. Friday and Saturday, and 11 a.m. to 7 p.m. Sunday. Admission is free. Call 440-286-3007 for more information.

It starts with an accidental gashing of a leg. Soon Esther -- Marina de Van's character in her debut film, In My Skin -- is sequestered in a hotel room, gnawing at her own flesh. This frank, disturbing, and gruesome portrait of a woman who becomes obsessed with cutting herself is a psychological study akin to Polanski's and Cronenberg's most probing works. De Van also wrote and directed, but it's her subtle performance -- which chronicles her compulsions as autoerotic fulfillment -- that heightens the French production. There are moments of flesh-shredding anguish that are as horrific as anything in The Passion of the Christ. In My Skin is at the Cleveland Cinematheque (11141 East Boulevard) at 7:30 tonight and 9:20 p.m. Sunday. Admission is $5 and $8; call 216-421-7450.

Producer Sheldon Adelman swears that men will like Menopause: The Musical. "They easily can relate to what their wives are going through," he says. The production, which opens tonight at Playhouse Square, is about four disparate women who get into a scuffle at a lingerie sale. Soon, they figure out that they have quite a bit in common. "The first time I saw it, I was dreading it," Adelman says. "I was in Florida, and it was a beautiful Sunday afternoon, and I wanted to play golf. But my wife had to see it. And it was so funny." There you go, guys. Menopause is at the 14th Street Theatre (2037 East 14th Street) through May 30. Show times are 8 p.m. Tuesday through Friday, 4 and 8 p.m. Saturday, and 2 p.m. Sunday. Tickets are $39.50; call 216-241-6000.

"It's not just white men," clarifies Jackie Bray, a co-author of How to Get Stupid White Men Out of Office. "The people who are running our country right now are very smart. They're just emotionally stupid and have no grasp of human relations." Designed to galvanize the "young, pissed-off, non-voter generation," the book documents 20 campaigns from the past five years that were swayed by young voters. "There really is power in our community," says Bray, one of a dozen contributors. "When we organize, we win. We can and will get stupid people out of office. But we have to organize ourselves and articulate a vision that makes sense beyond the small circle we make home." Bray talks about the book and what you can do at 7 p.m. at Mac's Backs Paperbacks, 1820 Coventry Road in Cleveland Heights. Admission is free. Call 216-321-2665 for more info.

The title of singer-songwriter Mason Jennings's new album, Use Your Voice, is also his new doctrine. Eschewing his usual sorta-busy arrangements, the Minneapolis native delivers many of the plaintive songs with just his voice and acoustic guitar. Most moving: "Ballad of Paul and Sheila," a tribute to late Minnesota senator Paul Wellstone. Jennings is at the Grog Shop (2785 Euclid Heights Boulevard in Cleveland Heights) at 9 tonight. Tickets are $10, available by calling 216-241-5555.

Props to the planet! Today's EarthFest 2004 celebration at the zoo offers live entertainment, tree giveaways, hands-on environmental activities for the kids (who'll also be able to participate in the art, poetry, and essay contest), and, of course, tons of tips on keeping the planet green. It all happens from 10 a.m. to 5 p.m. at the Cleveland Metroparks Zoo, 3900 Wildlife Way. Admission is $6, $3 for children. Call 216-281-6468 for info.

Jazz Meets Hip-Hop, Pt. 2, happening tonight in conjunction with the Tri-C JazzFest, reaches back to '70s fusion for inspiration. Percussionist Bill Ransom leads a group made up of jazzmen like Mike Phillips and Rodney Hubbard, rapper 350, and DJ Logic in a scratch-happy mix of vintage Miles and modern rhymes. It starts at 8:30 at the Beachland Ballroom, 15711 Waterloo Road. Tickets are $15, available by calling 216-241-6000.

Former Guided by Voices guitarist Tobin Sprout has spent the past 10 years making curious, disjointed music in a number of different bands (including Airport 5 and Fig. 4) and under various monikers (Bevil Web). But on his own, he's a bit more structured and conservative. His fourth solo album, last year's Lost Planets & Phantom Voices, is as close to conventional pop as he's gotten. Sprout's at the Beachland Tavern (15711 Waterloo Road) at 9 p.m. Tickets are $10; call 216-383-1124.

Apples are boring. So are potatoes. Bananas are kinda fun. But at Beyond Apples and Oranges: A Look at Exotic Fruits and Vegetables, a produce expert will fill you in on some of the more daring natural foods available in the area -- star fruit, persimmons, tomatillos, and other atypical eats. Selection and preparation tips will be dispensed, and, best of all, samples will be provided. Get ready for a fruitful evening at 7 at the Eastlake Library, 36706 Lake Shore Boulevard in Eastlake. Admission is free; call 440-942-7880.