Too Much of a Good Thing 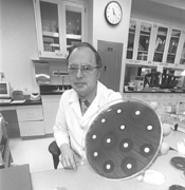 Dr. Michael R. Jacobs bustles to the back of his fifth-floor laboratory at University Hospitals, past assistants staring into microscopes and computer screens, past boxes of equipment and stacks of papers. In front of the window, he holds up a small plastic tray filled with what look like tiny red and brown ice cubes.

"This is what I mean," he says. "Look at how many of these organisms are still living." The tray is actually full of tiny petri dishes, a small fraction of the samples Jacobs uses in his research into the effectiveness of antibiotics. What he has found so far is not comforting. Nearly half the time, he says, the antibiotics prescribed for common bacterial infections simply don't work. The bugs are resistant.

Jacobs's findings echo those of a sweeping survey released by the World Health Organization last month, showing similar or higher bacterial resistance rates around the globe. The WHO study characterized antibiotics as "once life-saving medicines" reduced to "a sugar pill," based on survey results from hospitals, agricultural areas, and Third World countries.

Jacobs's study is more immediately relevant to ordinary Americans, because he is testing bacterial samples that come from outpatient doctors' offices in the U.S. The grim results clearly illustrate that the problem of bacterial resistance belongs not only to other, poorer countries that under- or overuse antibiotics, or farmers feeding them to livestock, but to American physicians and patients, as well.

"We've only had antibiotics for 50 years, and virtually everything we've done up to now has maximized resistance," Jacobs says. "Antibiotics should be regarded as vital, life-saving drugs, not something you give to anyone who's got a cold, just in case they get a bacterial complication."

Since January 1997, Jacobs and another researcher have been studying the resistance rates in two types of bacteria that cause ear infections, sinus infections, bronchitis, and pneumonia. These diseases are relatively mild, but two-thirds of all antibiotics used are prescribed to treat them.

Jacobs's study has tested the effects of popular antibiotics on 3,000 strains of Streptococcus pneumoniae and Haemophilus influenzae taken from sick patients at doctors' offices across the country. What he found at first surprised him: 50 percent of S. pneumoniae strains were resistant to antibiotics, and nearly 42 percent of H. influenzae strains were also resistant. Often, he says, killing the bacteria now requires 10 times more antibiotic than it did 10 or 15 years ago.

Jacobs cannot emphasize enough the importance of proper procedure when prescribing antibiotics. Mostly that means making sure that the infection is, in fact, bacterial. Half the time drugs are prescribed, he says, they're unnecessary -- something he attributes to increasingly demanding patients, willing doctors, and pharmaceutical companies that advertise directly to consumers. And superfluous drugs have no effect -- except to heighten bacterial resistance.

"If you treat a person with an antibiotic, even if he doesn't have a bacterial infection at that time," explains Jacobs, "you're still exposing his normal flora of organisms -- the potential pathogens -- to antibiotics and making them resistant. And even if you make a harmless organism resistant, it can transmit its resistance by swapping genes with an organism like the pneumococcus." He has seen 18- and 20-month-old patients, exposed to constant viral infections in day care, "who have been on antibiotics virtually every single day since they were six months old. We found incredible resistance there, not surprisingly."

According to Dr. Jon Abramson, chairman of the American Academy of Pediatrics' Committee on Infectious Diseases and a physician himself, the situation is fairly urgent. "It's changed how we practice medicine. Already, there are a few bacteria that we cannot treat anymore. A small number of patients die in America every year." Still, he says, the pressure doctors face to prescribe unnecessary antibiotics can be intense. "I understand why they do it," he says. Sick patients don't want to leave without a prescription. "And it would take 15 minutes to talk them out of it, and that's 15 minutes that doctors don't have." The second most common illness for which antibiotics are prescribed, he says, is a virus: the common cold.

Ken Goodman, a family practice physician in Westlake who sees about 400 patients a month, has to coax many patients out of expecting antibiotics. "Very commonly, patients will come in and tell you the name of their infection, and oftentimes, they'll tell you the name of the antibiotic they want," he says. "There are patients who come in with the goal of getting an antibiotic, period." But more often than not, he says, people don't have the illness they think they do and leave with no prescription. It's the doctor's job, says Goodman, to enforce the rules. "Because I'll tell you this: The lay public does not care about the fact that there is bacterial resistance going on. When you are sick, you want to be better in the fastest way possible. So you're going to say anything to get an antibiotic, if you think that's going to get you better quicker."

Articles are published all the time to help physicians determine when an infection is bacterial and which antibiotic to use, but Jacobs worries that no one is paying attention. He says pharmaceutical companies -- from whom doctors and patients get much of their information these days -- often make false claims. Other times, doctors prescribe once-a-day antibiotics that are easier for patients to take, but may be helpless to kill the infection.

Here and there, things are getting better. Drugs now have to pass stricter tests, and new vaccines -- like a recent pneumoccocal vaccine that covers most of the resistant bacteria -- will, if routinely given, slow the descent into resistance. "But we've got to be careful," Jacobs says. "It takes five to seven years to bring a new antibiotic to market, but it can take a couple of days for an organism to become resistant. Bugs work thousands of times faster than we do."