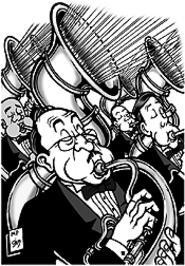 Whales travel in pods. Birds fly in flocks. A group of tuba players -- such as the 125 or so tuba family instrumentalists who will gather Saturday at the Palace Civic Center in Lorain for a Tubachristmas concert -- play in what could best be described as a herd.

"In music," says Lorain's Tubachristmas coordinator, Dale Hildebrand, "we say it's a sound with a lot of weight. You might think 125 tuba players -- that just sounds gross. But it's a really neat instrument for large choirs. The tone color is really mellow. It's an enormous mass of sound, when you put all of them together."

Tubachristmas is an open yuletide tuba jam session with one rehearsal. The first low brass spectacular took place at Rockefeller Center in 1974, conceived and organized by Indiana University tuba professor Harvey Phillips -- who has variously been called "The Paganini of the Tuba," "Mr. Tuba," "The Tubameister," and even "Iacocca of the Tuba." Phillips wanted to honor his recently deceased teacher, the great tubist William Bell, who loved Christmas and, in fact, was born on Christmas in 1902. Since very little music is written for oom-pah brass to carry the melody, Phillips called his friend Alec Wilder to arrange carols that would become the Tubachristmas songbook. Wilder would later die on Christmas Eve in 1980.

"Wilder was one of the premier American composers," Hildebrand says. "He was having some hard times in his life and had fallen into a depression, but when Phillips called him, he put down the phone and got started right away. He called Harvey the next morning, having already arranged a bunch of the carols."

Thus Tubachristmas was born. These days, annual tuba concerts shake the holiday air in cities around the world. Anyone who plays an instrument in the tuba family -- tubas, sousaphones, euphoniums, or baritones -- is invited to come and play.

"Many of the players aren't full-timers," Hildebrand says, "but we get a lot of people who switch over for one day to play baritone or tuba. Some people just like to play the Christmas thing, so they take the baritone out a few weeks ahead and practice up. We get people from all over Northeast Ohio -- high school band members and all ages. Last year, the youngest player was 10 years old, and the oldest was 78."

Hildebrand, whose full-time gig is band director at Brookside High School in Sheffield, is first and foremost a trombonist. His son Jeremy, a senior in high school, hopes to attend college on a tuba scholarship. All five members of his family have played at Tubachristmas for the last several years. As Hildebrand's wife Jane says, "The family that plays tuba together stays together."

Hildebrand enjoys the enthusiasm of the players at these events. "People decorate their tubas," he says. "My kids and my wife get battery-powered lights to wrap around their instruments. We have people who use garlands. One year a guy actually put an electric train around the bell of his tuba, and it ran around in a circle while we played. Once in a while someone will put a Christmas tree on top."

The most captivating aspect of Tubachristmas, however, remains the sound -- a fat and luxuriously powerful raspberry of a noise that can fill any room with warmth and cheer. "It's such a unique sound," Hildebrand says. "You don't hear that sound just anywhere at Christmas."

So have yourself a merry Tubachristmas now. -- Michael Gill