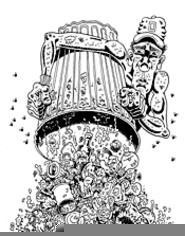 Derf
Derf's weekly comic strip The City has always leaned toward the repugnant side. So it's no surprise that his first graphic novella (it's a fancy word for comic book) comes replete with maggot soup, bags of exploding trash, and an overflowing porta-john.

Trashed is an autobiographical tale of the cartoonist's stint as a garbage man during the summer after his high school graduation. "I just thought it was a good yarn, in a gross-out, funny kind of way," explains Derf, who was born John Backderf in the book's setting of Richfield 42 years ago. "Just when you think, 'Oh God, that's the most disgusting thing I've ever seen,' you turn the page and there is something even worse." Derf will sign copies at Mac's Backs Paperbacks in Cleveland Heights on Saturday, February 9, from 1 to 3 p.m.

Essentially a series of vignettes, Trashed follows Derf and friend Mike as they deal with rotting carcasses, evil co-workers, and more while riding on the back of a garbage truck. "It's a world that most people aren't aware of," he says. "You put your trash on the tree lawn and someone takes it away. You have no idea about this whole little world that revolves around picking up your garbage."

And according to Trashed, it's a world populated by a trigger-happy animal control officer, a local eccentric who wears multiple layers of clothing during the summer, and the head of the service department who follows his employees around, dispensing unsolicited advice on the best technique for tossing bags of garbage ("Use more wrist action" and "Get a good arc on the throw" are among the scraps of wisdom dispensed in the book).

Derf says he took no artistic license with the material. He swears it's all true, including a particularly painful incident in which he was toppled from the side of a truck by a road sign. "That happened all the time. Especially with mailboxes. They'd get you in the thigh."

He's putting the finishing touches on his next book, My Friend Dahmer, in which he relates his high school relationship with serial killer Jeffrey Dahmer. The book is a dark yet surprisingly sympathetic portrait of a kid more troubled than evil -- or at least he was at that young age. "I think the piece has a lot of lessons, especially post-Columbine," Derf says. "If you're not paying attention, and you let a kid like this just spiral out of control, there's a very real cost."

As for Trashed, the artist has only one regret. "It really should be a scratch-and-sniff book," he jokes. "If I drive by a landfill, I know so immediately. And maggots. I immediately know the smell of maggots."

Lucky for us, his budget didn't allow for such sensory trappings.