How a Canadian collective stuffed the indie world into an automobile. 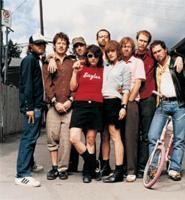 Here's a picture for you: Four indie rockers are headed to the Broken Social Scene gig. Their Civic is filled with tattered hoodies, new American Apparel, and pastel lady slippers. The Magnetic Fields are on the stereo.

Driving is Gabe. He likes the hard indie stuff: mathematical time maneuvers, stabbing guitars, and anthemic angularity all shifting against one another. His girlfriend Kyoko rides shotgun. She's talking over her shoulder to her best friend, Chelsea, in the back seat. They both like Stereolab, but they're not quite sure about those Juana Molina jams. Kyoko takes her indie pop with bubbles, but Chelsea likes a voice that can break her in half. By the way, Chelsea dates Josh, who gazes out a side window, silently ruminating on the differences between the serial interpretations of composers Karlheinz Stockhausen and Arnold Schoenberg. He's on the avant side of indie: free jazz, doom metal, harsh noise, etc.

Each is totally different from the others, but their love for the Scene, the flagship band of Toronto's Arts & Crafts mega-collective, unites them. Kyoko is enamored of the songs. More than once, she's described the banjo-and-vocal purity of "Anthem for a Seventeen-Year-Old Girl" as a dream. Chelsea also likes the song, especially the honeyed tones of vocalist Amy Milan (who leads her own pop band, Stars). But she really loves the exasperated vocal battle between man and woman on "Almost Crimes" -- whose crunching guitars are a magnet for Gabe. He's hooked by the band's crescendos, as well as the controlled micro-explosions of post-rock catharsis that slingshot him into motion. Now, to be honest, Josh initially hated BSS. But when he put on headphones, he heard the textures, the keyboard countermelodies pushing against the stepwise guitars, and the extended seventh chords. Bee Hives, a collection of B-sides and obscurities, is his favorite.

Formed by Kevin Drew and Brendan Canning in 2001, Broken Social Scene grew organically. Its debut, Feel Good Lost, couldn't be performed live by two people, so local pals began sitting in. Five years later, 11 or so of them found themselves united under one name onstage in Chicago, stealing a weekend's worth of Lollapalooza from such acts as Wilco and Kayne West with a unanimously lauded 45-minute set. Indeed, the Scene sometimes sports more than a dozen members, which means that such a big band -- packed with divergent viewpoints, influences, and intentions -- creates a wider entrance for all kinds of fans.

"I always maintain that I much prefer to complete musical ideas with partners," Canning says.

Collectives in indie rock are nothing new, and at this point in independent music, they're more prevalent than they've ever been. Here in the States, Sufjan Stevens and his friends in the Asthmatic Kitty circle pump out projects regularly, while back in Canada, the Constellation network continues to make complex statements through bands like A Silver Mt. Zion and Do Make Say Think (currently on tour with the Scene). But according to Canning, Broken Social Scene is different from the others.

"We have so many people that are adding their thing," Canning explains, while he and nearly a dozen band and crew members sit bored in a parking lot outside Houston's Warehouse Live. "It becomes such a diverse palette that you're dealing with, and everyone has their nose and fingers in your pie, which is a great thing. But you just have to sort through it all and make some reason out of a catastrophe."

While Stevens' crew requires a new album or band for each small shift in sound, BSS seems built entirely upon avoiding stasis and a fixated sound. Its second album, You Forget It in People, was a critical and popular breakthrough, prompting a reissue of the outfit's small-print debut and the aforementioned Bee Hive. The Scene's third, self-titled album -- the first released amid widespread expectations -- is very much a continuation, but it sounds wider in scope and more magnetic.

The rock songs have a harder drive and are that much the better for it. But Broken Social Scene -- in all its trumpet-blaring, electronically underpinned danger -- rarely sounds as if it's overplaying. "Hotel" -- skittering electronic beats and ice-tipped vocals -- is a total trance party for Chelsea and Kyoko. But Josh enjoys the interlude, "Tremoloa Debut," which unfurls like improvised, digitally processed guitar work, while Gabe digs the breezy "It's All Gonna Break," as it tucks its dark edges beneath a massive chorus.

Broken Social Scene took two years to make, write, and record between tours. The variable influences -- so many people working over the course of so many sessions -- come together as entirely appropriate pieces of a near-perfect quilt.

"I don't think we're after one sound in particular," Canning says. "I just hope we maintain the ability to take chances and do things that are not 'normal.' Otherwise, there's no point in being in this band."