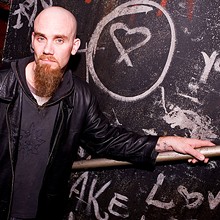 The music on Nick Oliveri's latest album, Death Acoustic, is some of the most brutal the bassist has ever recorded. For his accompanying solo acoustic tour, Oliveri should have a Woody Guthrie-style sticker affixed to his instrument, reading "this machine kills fascists, and anything else in a 300-yard radius."

But for all the bile that Oliveri has radiated throughout his career with Kyuss, Queens of the Stone Age, the Dwarves, Mondo Generator and now on Death Acoustic — beloved deviant G.G. Allin's "Outlaw Scumfuc" closes the disc — Oliveri is relaxed and in good spirits.

"My band [Mondo Generator] was off making babies, and they wanted to take time to do it, which makes sense," says Oliveri, explaining the motivation behind Death Acoustic. "I had a bunch of time off, and I couldn't afford to stop playing mentally, physically or financially. Basically, I just wanted to have some fun. I take a different approach than the traditional singer-songwriter dude. I like to do songs that freak people out, even me a little."

Oliveri is no stranger to the acoustic side — he plays in an unplugged duo with the Dwarves' Blag Dahlia called the Uncontrollables — but Death Acoustic is conceptual in more than execution. Oliveri reinterprets some of his favorite songs by his favorite artists — including the Misfits' "Hybrid Moments" and QOTSA's "Gonna Leave You" — in a form that they haven't existed since they were demos. There were substantially more than the 10 that wound up on the album.

"I did a bunch of songs, and the label put together some of the tunes," he says. "I sent it to them two different times, and they kind of compiled a thing. Maybe we'll do another one soon."

On tour, Oliveri is performing the Death Acoustic material as well as some surprises, including a cover of Kyuss' "Green Machine" ("Some nights it's faster than others," he sings. "Some nights it's brutal and slow and chunky") and brand new originals, some of which are on his MySpace page. The result is an exciting and engaging presentation that has little in common with your garden-variety folk act.

"I've got this gal, Michele Madden, singing a few songs in the set with me, but the rest of them I'm doing myself," says Oliveri. "It's sink or swim, for sure. It's real. I've played nude before, but it's truly in every sense playing naked. You don't get a second chance. When you break a string, you're like, 'Shit, I've gotta transpose this as we're going and make this happen.' You can't do a bass slide and get out of it, or hide behind the cymbals and drums — it's all you standing there. It's making me a better singer and player, I hope. There's always room to get better, so I'm hoping that's what it's doing for me."

Anyone who might be put off by the idea of Oliveri in an acoustic context can rest easy. He's bringing all of the visceral energy and lava-hot vitriol that defines his electric work. This is not Nick Oliveri's tribute to James Taylor.

"To me, it's a treat not only for someone coming to see it, but for me too," he says. "The crowd's very much a part of the gig. Some nights they're singing along and calling out songs, and I'll try to oblige them, no matter what they yell out. 'Kool and the Gang ... all right, we'll try it.' We came up with Unkool and the Gang; that'd be a good name for a band."

Clearly, some of Oliveri's fan base is concerned about the nature of his acoustic tour, as evidenced by the audiences that have been turning out.

"It's a more dedicated fan and music listener," says Oliveri. "Some people don't want to see somebody play acoustic; they're into electric music and that's it, and I can understand that. So it's more of a diehard, I'll-back-you-no-matter-what-you-do kind of person. It's great because I'm getting to meet these people on a friend level."

When Oliveri finishes his acoustic shows, he's planning to immediately get back to work on an album of new material that he's working on while Mondo Generator is on family leave. Oliveri's new band is as yet unnamed ("We were going to be called TNA — which is the Nihilistic Army. Then we found a hair-metal band from the '80s had that name, so we couldn't use it"), and features Euroboy and Happy-Tom from Turbonegro and Tommy Akerholdt from Serena-Maneesh. Having just returned from Norway, where he worked on the band members' home turf, Oliveri is stoked about the group's potential.

"It's been 10 years since I've been a part of something brand new," he says. "I've played in other people's ongoing projects or toured with people, but to be an original member of something that's forming right now is very exciting for me."