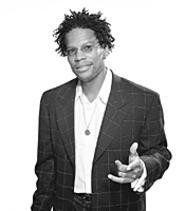 Things are going well for D.L. Hughley. "I can't complain," he laughs. Though no one would blame him if he did. The veteran comic recently lost the derby to replace Craig Kilborn as host of CBS's Late Late Show. But he's already rebounded and has a deal in place to develop a talk show for Comedy Central.

His temporary seat behind Kilborn's old desk only fueled his optimism, he says. And just because he'll be sitting at a microphone soon doesn't mean that his stand-up days are over. "When you're on TV, you have a safety net," says the thrill-seeking Hughley. "You don't have that onstage."

Hughley's family sitcom, The Hughleys, ran for four seasons on UPN. But don't read too much into its premise, he cautions. "Nobody in my family is funny," he says. "I'm a kid from Warren, Ohio, and there's nothing funny about that. In fact, my mother still gets angry that I now get paid for doing what I used to get a whuppin' for." Hughley plays the Improv (2000 Sycamore Street) Thursday through Sunday. Show times are 8 p.m. Thursday and Sunday and 8 and 10:15 p.m. Friday and Saturday. Tickets are $26 and $28; call 216-696-4677. -- P.F. Wilson

Christina and Michelle Naughton say they quarrel only when they perform with each other. If that's true, they've been arguing a lot lately. The twin 16-year-old piano prodigies from Madison, Wisconsin, have been preparing for their debut as a twosome at Sunday's 3, 2, 1 . . . Piano with the city's innovative classical ensemble Red {an orchestra} and Cleveland Institute of Music's Sergei Babayan. The Naughtons journey from Madison to Cleveland regularly to study with Babayan, who suggested they join him for Sunday's performance. "It's a long trip, but each lesson with him is like a feast," Christina says. "Before him, we'd never heard so many colors coming out of the piano." Adds Michelle: "I hope music's always a part of our lives." 3, 2, 1 . . . Piano is 3 p.m. at Masonic Temple Auditorium, 3615 Euclid Avenue. Tickets range from $15 to $59; they are available by calling 440-519-1733. -- Zachary Lewis

Sandi Heidelman had made countless trips to the Windy City, but she'd never heard of the Chicago Afrobeat Project till the city's annual folk-and-roots-music festival last July. Sitting inches from the stage, the Lakewood bank teller watched the 10-man band unleash an hour-long fusion of African rhythms and jazz melodies. "One by one, each guy stepped out in front, played solo for a few minutes, then blended back into this cool collective groove," recalls Heidelman. "I was like, 'If they ever come to Cleveland, I will be the first in line to buy tickets.'" Here's her chance: The Chicago Afrobeat Project performs at 9 p.m. Friday at Wilbert's, 812 Huron Road. Tickets are $8; call 216-902-4663. -- Cris Glaser

is being called a "multimedia party in three acts." But don't let that keep you away. Ryan Lott's one-man show (part of Cleveland Public Theatre's Big [Box] series) incorporates hip-hop, electronica, and a video installation, and by evening's end, they're all tied together somehow. Connect is at CPT's James Levin Theatre (6415 Detroit Avenue) at 8 p.m. Friday and Saturday and 3 p.m. Sunday. Tickets are $10; they are available by calling 216-631-2727. -- Michael Gallucci