The scaled-down tour of The Civil War relieves Broadway's bloat. 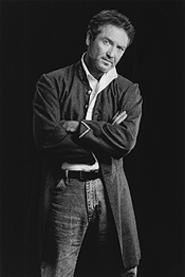 Larry Gatlin, Confederate stud.
If, by some improbable quirk of fate and alcohol, Judy Garland and Hank Williams had cohabited, the resulting love child would have grown up to be Larry Gatlin. In this country singer-songwriter, their gifts coalesce. It's all there -- the emotional honesty, the intensity, the Kentucky bourbon wail, and the halting catch in the throat. These all make Gatlin's every song or utterance resonate with gospel sincerity and a touch of cracker-barrel irony.

These qualities made him ring true as the eponymous cowboy philosopher a few years back in the national tour of The Will Rogers Follies. Now Gatlin has become the indispensable breath of integrity that keeps Frank Wildhorn's historical extravaganza The Civil War from foundering onto the shoals of a history infomercial, keeping it a notch above something peddled on late-night cable.

Before Gatlin came on board, The Civil War suffered its own Gettysburg in a bloody Broadway demise. Yet, in its brief run, the tourists purchased their two-for-one tickets at the half-price booth on Times Square, some even crying their eyes out and performing their standing ovations. A few diehards even went so far as to buy the two-CD set. But these ungrateful theatergoers were unwilling to pay retail for tickets.

Meanwhile, the naysayers, including the majority of critics, staggered out in search of a mint julep to revive them from a night spent at the waxworks. The reenactment of brother against brother, dutiful nurses comforting dying boys, and worst of all, slave auctions scored in a snazzy rhythm-and-blues meter, played with the creepy soullessness of the automatons in Disney's Hall of Presidents.

All this was brought to life with a bargain-basement score, full of ragged updated approximations of Stephen Foster, Mahalia Jackson, Harold Arlen, and B.B. King. In spite of composer Wildhorn's hold over the pop literati with classic comic-book musicalizations of Jekyll and Hyde and The Scarlet Pimpernel, this plotless evocation of Scarlett O'Hara's favorite war was given the heave-ho in record time.

A new set of money men, noting all those cheerful tourists, decided to emulate Dr. Frankenstein and stitch together and reanimate this battle-scarred soldier. The initial step in its resurrection was to get a fresh perspective by bringing in English director Stephen Rayne. It was Rayne who helped Trevor Nunn jump-start Tennessee Williams's stillborn Not About Nightingales to vivid life last season. Here, he performs much the same service.

His first life-saving maneuver was to dispense with the Radio City Music Hall-like battle scenes. He reduced the cast to a fraction of its former size. The new mantra became simplicity. The slaves, belles, and soldier boys are no longer required to satiate audiences in the spectacle of one of those British Les Mis epics.

Rethought along the lines of an ambitious high school pageant jointly put together by the drama club and choir, this road company takes on a new bounce and immediacy. As in all pageants, there is little attempt at story, just archetypes: the doomed soldier, the ever-defiant slave, the disillusioned Confederate captain. Done with the arrogance of the here and now, these figures refuse to succumb totally to the dictates of another century. As in Jesus Christ Superstar, past and present are symbolically intertwined. Each performer wears his defiant anachronism: a face-covering Madonna microphone that proudly disfigures the historical veracity of the costumes.

Aside from Gatlin's undiminished magnetism, the evening's grace is its physical fluidity. The cast is artfully blended into Wendell K. Harrington's historical projections. Three soldiers sit in front of a period projection of a battlefield. A young couple stand in front of a plantation. The performers seem to be embedded in a Matthew Brady photograph. In between projections, when the screen turns a soothing gray or an angry red, the company seems to be floating ghosts in purgatory or hell. This extraordinary dance between past and present almost makes us forget the score is still as mediocre as it was on Broadway.

BeBe Winans, as the defiant slave, gives the gospel-flavored "River Jordan" number the kick of a poor man's "Ol' Man River." Like his co-star Gatlin, Winans imbues a history lesson with flesh-and-blood passion. Clay Roberts's doomed soldier husband, Amy Rutberg's golden-haired nurse, and Carolyn Saxon's awestruck slave all manage to give scope and power to what are little more than historical lithographs.

As we read the gigantic projections that tally up the massive number of dead and wounded in each battle, the manipulation seems as shameless as any World War II movie epic. Yet, we really don't mind. Especially when we remember what Gatlin has said about his reasons for doing this show: a son who goes to school within miles of a Civil War battlefield, but has spent less than a day studying this war at school. For all this child could grow up to know, the war between the states was merely an excuse for Vivien Leigh to win an Oscar. For his son's edification as well as our own, this will have to suffice.

Keith A. Joseph can be reached at [email protected].