Come one, come all: Stroll the midway at the punk-rock circus. 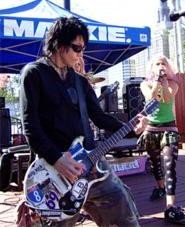 Joan Jett shares her "Bad Reputation" with pop-punk Shiragirl.
Musicians straggle into the lounge to beat the deadline, offering up trash to be deified at a Warped Tour exhibit at the Rock Hall, tentatively planned for late January.

The offerings include Gogol Bordello's smashed acoustic guitar and the stinky T-shirt of Avenged Sevenfold singer M. Shadows. The punk-rock band Millencolin donates a beer bong and a picture of the group posing with the 2000 Swedish beer-bong team.

A few feet away, in a VIP lounge, Rock Hall Marketing V.P. Todd Mesek suggests that the Hall host a show to celebrate the opening.

Welcome to the Warped Tour, circa 2006. Twelve years in, Lyman continues to tinker with the lineup. Last year's tour featured three bands riding Top 10 albums (Hawthorne Heights, Fall Out Boy, and My Chemical Romance); this year, it's all about smaller acts and more of them. "I felt we needed to do it this year to remain relevant," he says.

As you stroll Warped's musical midway, there's much that sounds familiar. Sidestage act Forever in Fall tears through a cover of Eddie Money's virulent "Take Me Home Tonight," causing the audience of two dozen teen girls (and three guys) to scream and clutch each other. On the main stage, NOFX frontman Fat Mike taunts the crowd, which responds by hurling plastic bottles at him. The members of the California quartet sidestep requests for the Bush-bashing "Idiot Son of an Asshole" as deftly as they dodge the projectiles, and joke that their songs sound like Bad Religion.

There's some onstage friction between established and newer acts. Fat Mike disparages the band Motion City Soundtrack, calling it "Motion Sickness Soundtrack," while chunky metalcore act Everytime I Die perpetuates its ongoing beef with Less Than Jake, which it dismisses as "Less Than Jack."

Elsewhere, Cleveland's the Lovekill appeal to passing patrons between songs. A couple dozen pause to watch the jagged post-punk four-piece, reminiscent of Wire with a touch of garage grime.

In the PlayStation tent, a girl with Manic Panic hair and rainbow-laced Chucks deftly plays Kiss' "Strutter" on Guitar Hero II, a soon-to-be-released videogame in which players strum a plastic axe. The crowd seems just as excited by the faux playing as it is by many of the real bands onstage.

After the show, some of the audience heads to the Garage, where Jett and Fat Mike are spinning. Others go to the House of Blues, which is hosting Riverboat Gamblers, Rollins Band, and X. And some go to the bathroom to get high.

Exhausted by a long day of drinking and smoking, a man sits in a stall, contemplating his packed pipe. Just as he's about to take a hit, a stranger walks into the restroom. Paranoid, the pot smoker pauses and waits for the stranger to leave.

The pot smoker waits, but the man at the toilet remains.

Then the pot smoker realizes what he is hearing: The stranger is snorting cocaine while accidentally triggering the toilet's automated flush.