Dexter Davis could be making masterpieces. He's content just to guard them instead. 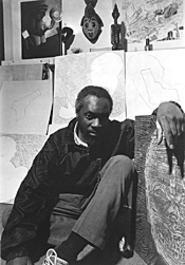 Every local art rat has a Dexter Davis party story -- but not one they'll recount on the record. A regular at exhibit openings and anywhere else there's free wine, Davis has long been the life of the party, known as much for his big hugs as his unpredictable rants. "One time, I heard this guy walked up to me, just talking or whatever, and I just screamed, 'Get the fuck away from me,'" says Davis. "The sad thing is, I can't remember any of it."

Some of the Davis tales are memorable, but mostly it's his paintings that resonate with people. The native Clevelander is a critics' darling who has fallen off the radar; his work, often celebrated at local shows in the '90s, hasn't been comprehensively exhibited in years. When he does have a show, curators and critics agree, it's worth the wait -- but the wait's the thing. If the creative process is universally laborious, Davis's is comatose.

If one thing stands between Davis and widespread acclaim, it would be Davis himself. Any day of the week, you can find him at the Cleveland Museum of Art, where he's been a gallery guard for 13 years. Erect and attentive with his navy blue suit, unkempt hair, and advancing vitiligo on his hands and face, Davis hangs out with the great masters, making sure you don't get too close, maybe asking you to lower your voice. Though his best work may be worthy to hang among those he safeguards, he's content merely to stand among them. Plenty of others think more of Davis's work than he does himself.

It didn't always seem that way.

Davis's reputation was forged in the early '90s with works that employed visceral dialects that created a mix of fascination and revulsion in viewers. An abstract expressionist informed by a background in printmaking, Davis embraces the concrete imagery of the physical world, so often shunned by textbook abstractionists. He typically creates prints from woodcuts, pastes them onto canvas, and then draws and paints on top of them, creating ideas as he goes and often incorporating the remains of past failed works. He injects subtle allegories to create visual operettas -- stirring, intriguing narratives. "The Dream," an early work featuring a distressed, pale woman isolated in a corner of the canvas, exemplifies this style.

In those early days, Davis's works were frequently displayed at Busta's Little Italy gallery. His pieces sold consistently -- sometimes for as much as $2,000. Buyers felt as if they had found something new and special in his work.

"There's a gut truth to the work, not based on current trends or theory," says Kristen Chambers, a freelance curator who put together Davis's first comprehensive show at the Center for Contemporary Art (now MOCA) in 1998.

"The Black Series" is a 1989 collection of Davis's work as a fourth-year student at the Cleveland Institute of Art, when he worked in a variety of subjects -- pheasants, fruits -- and limited his palette to black and white, a trend that foreshadowed his later stylistic excursions. Backgrounds and foregrounds became fused together. He used a kneaded eraser to scratch out charcoal, creating a glow around his subjects, which were often taken from photographs. Davis's intent wasn't to show much of the subject, but to say something about its details. "As my work continued, it simplified more and more," he says. "You start to get a sense of the subject's motion."

Davis's stylistic progression is evident in his personal collection, which he catalogs by various eras he's explored over the past 10 years. An early untitled opus features an African-style tribal mask -- an icon that has become a hallmark of his work. The viewer, perhaps, is drawn to the masks for what they say and for what they don't say: African masks both hide and reveal, often having more than one ceremonial intention -- a fact of which Davis is likely to be well aware.

Through the years, Davis has drawn comparisons to the late New York wunderkind Jean-Michel Basquiat, in part for the style of his works, but also for his easy demeanor, his mussed 'fro, his substance abuse, and the sense that he too is a bit of a brilliant tragedy. But Basquiat was an untrained graffiti artist who benefited from a New York gallery system that made an icon out of him. Davis, on the other hand, came into popularity shortly before popular trends in art shifted away from muted paintings in favor of installations, conceptual pieces, and "cocktail art" -- colorful works that let the viewer reflect on happy times.

"During that time when painting fell out of vogue, Dexter may have been forgotten about," says Michael Parks of 1300 gallery. Parks also sees a lot of art-world clichés: a worthy artist who struggles because he won't play the game. "If Dexter gets tied in with the right people," Parks says, "he could be big. Huge."

But Davis isn't much into marketing, and he's toned down the partying as well. To Chambers, he is the typical artist's artist, who is above the attendant schmoozing required of most who are successful. And, as with every other artist, he makes art with a message. His message just happens to be Slag off.

These days, Davis wants only to get to his studio and work without distractions. He's taking his paintings in a new direction, working to expand his visual vocabulary. His may be the most stunning art you'll never see, and that would be fine with him.

"He's working on an ambitious scale lately," says Carol Cassill, a former instructor of Davis's at CIA. "He's trying to suffuse his special gifts into a mature statement."

It's slow going, but Davis is in no hurry. Security layoffs are expected when the art museum begins its major renovation in two years, so he's considering teaching at the Institute. His work sells when it's shown, but he rarely exhibits it, preferring instead to sell out of his home. Davis says he doesn't know what the future holds, but that it's only a matter of time before he makes his move. What move? He shrugs.

"Sure, the art has to sell," he says. "But that isn't as important for me as the art being alive, as the art itself having a purpose."

Jump to comments (0)
« Killing With Kindness   |   Witness to the Persecution »