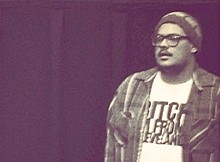 Comedy is abundant in Cleveland. This means there is an ever-expanding base of people trying it, improving and progressing through the never-ending quest for consistency. There's no way to practice comedy aside from doing it. Here's a run down of the places and spaces I'd like to see your faces. You won't be sorry.

Garfield may hate Mondays, but I love them. When things line up right, it's possible to zip around town and do four sets. FOUR. That's big city status!

The chill anger of John Bruton is on display as he runs a show most Mondays at the Grog Shop at 9 p.m. Sometimes it's downstairs at B-Side. Other times, there's no show! Check grogshop.gs for deets.

Ryne DiPerna applies his acerbic wit running the open mic every Monday at the 5 O'Clock Tavern in Lakewood at 9:30 p.m. It's like Secret Soul Club but way less sweaty and attended, but you can fix that. I promise not to #whitepeopledancing you.

The ever-shrinking Bill Squire and his muscle Cody Cooper run a weekly showcase at Barrio Lakewood at 10 p.m. There's late night comedy and tacos and the hostess isn't allowed to leave until after the show and she HATES IT.

The Don of Dirty comedy Jeremy Sheer has a realllllly late night show at the Corner Pub. It's mostly just a handful of sad drunks, but it's a rough and tumble room and if it's rolling by 11:45, I'll usually pop in there. But Sheer doesn't like conforming, so the start time is real fluid.

The Chucklefck.com open mic is Tuesdays at Reddstone at 9 .mp. It's one of the best spaces to catch a show, and every week it's a mix of new, old and creepy comics. Jimmie Graham, an innovative and dynamic up-and-coming comic helps me produce the show. I'm there every week, closing out the show. It's a good place to meet new friends, form bonds or meet a good nemesis. Do you know what nemesis means?

Lakewood Village Tavern has become a breeding ground for the next wave of Cleveland comedians. A show-up/go-up open mic that sees 30 to 40 comics performing every Wednesday starting at 9, it's a marathon session hosted by the affable Joshua Morrow. The later the show, the more random the moments.

It's one of my favorite places to work on new stuff, but I have walked in and sat through two minutes and 45 seconds of a comic's set and he said rape 23 times. Yeah, it got to the point I started counting. But you can wander into the main bar and float back and forth between the show and the jukebox that they refuse to turn off for the show and it's a good time.

The Jolly Scholar on CWRU's campus is set to host a weekly comedy series Wednesday nights at 9:30 p.m starting in January. There are shows December 3 and 10, and once it goes weekly it'll be a place where people who live in roundabouts and have no concept of proper street gridding can come together and eat good, drink cheaply and see a nice hour or so of comedy and stick around for late night Bingo! JUST LIKE YOUR REALLY CHILL NANA'S VIBE.

There are several shows on Thursdays but I don't always go to all of them.

Multiple dad Aaron Pearl hosts an open mic at Sachsenheim Hall on Denison Ave., and they have a really popular taco night on Tuesdays that's very well attended but the $0.75 hot dog and burger night on Thursday must be too suspiciously cheap because the shows are still a secret to a lot of folks.

Tall, handsome and somehow still unconfident Steve Mers hosts a weekly open mic at Booth's in Lakewood at 10 p.m. every Thursday. It's a lot of fun! Probably my favorite new place. The kitchen closes a SMIDGE too early, but it's a fun backroom show.

Chad Zumock runs an open mic contest at Vosh in Lakewood. I don't know what time it starts.

Plus, there's the Improv and Hilarities offering professional shows EVERY week. People have started to ask me, "What's next for the comedy scene?" and honestly, it starts with more of you experiencing it. It's been invigorating to have people tell me that they view the comedy as something they can do to be civically engaged. There are shows all over town, at intimate, offbeat, ideal, awkward and innovative spaces. There are comics developing unique perspectives and ideas. The art form is growing.

And then you hear an open micer say rape 23 times and you're like, Maybe this isn't an art.

Unfortunately, right now there's nothing to separate the two. I'd ask you to come to a comedy show sometime, but I'll make it even simpler than that: Just go out and do SOMETHING. There's so much culture and life in Cleveland but you won't experience any of it staying at home complaining that there's nothing to do.

A city pops as a comedy hub within the industry once ex-pats start to gain exposure. Portland churned out Matt Braunger, Ron Funches and Ian Karmel while the Bridgetown Comedy Festival helped highlight the scene to comedians all over the country.

Chucklefck OG Jim Tews appeared on episodes of Last Comic Standing and Louis this year. Mike Polk Jr. was part of an HBOCanada filming at Just For Laughs this year. It's sad the scene will be losing Ryan Dalton to L.A. in 2015. He was one of the role models for me when I started — a comedian from Cleveland headlining around the country who'd appeared on Comedy Central. Being a professional comedian in Cleveland was a tangible thing. He's one of the most talented comics to come out of CLE. I'm sure he'll do great things in LA. Which will turn attention to Cleveland, where the Accidental Comedy Festival has been growing every year, highlighting the scene to comedians all over the country. Maybe someone will notice. Maybe not.

Either way, there's no denying that Cleveland is crushing it right now. Blockbuster movie filmings, the Gay Games, the Republican National Convention, The Return, the Justice Department investigating our police department (one of two, take that #Ferguson!) and a whole wave of development and innovation all over the city.  LeBron said it in that Nike commercial: "It's time to bring [Cleveland] something special," which is invigorating but slightly bogus, because there's always been something special here. But that commercial was super dope, proof that you CAN get thousands of people in Cleveland to come together for one purpose and absolutely no one will notice it while it's happening. But the proof is there afterward.

Jump to comments (0)
« The Pitfalls of Dating a Comedian   |   Cleveland’s Newest Comedy Room Is One You Probably Don’t Know About. Please Read On, and Be Sure to Flush »

Latest in The Comedy Issue