When the Stars Came Out 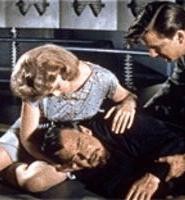 Forbidden Planet (Warner Bros.)
Long available as faded discount product, Fred McLeod Wilcox's 1956 masterpiece -- the movie without which Star Trek, Star Wars, 2001, and, oh, Lost in Space wouldn't exist -- at last gets its proper due; this double-disc collection comes with everything but stardust and rocket fuel. The tale of a United Planets spaceship, captained by a never-better Leslie Nielsen, sent from Earth to retrieve a scientist (Walter Pidgeon) and his hot-to-trot daughter (Anne Francis), Forbidden Planet is standard-issue 1950s sci-fi; it's propelled by a mixture of Cold War paranoia and kitschy humor. But it still plays ahead of its time -- thanks to the score constructed from "electronic tonalities," for starters -- and the extras (three docs, more films and TV shows starring Robby the Robot, deleted and lost scenes, and on and on) only juice the value of an invaluable collection. -- Robert Wilonsky

The Da Vinci Code (Sony)
"Over 90 minutes of extras," boasts the sticker on this double-disc "special edition" -- well, sure, if your idea of an extra is a series of puff-piece infomercials that regurgitate the same footage over and over while adding press-kit interviews with Ron Howard, Tom Hanks, Dan Brown, and everyone else who made a mint off this sourball. At the end of the day, you have to ask yourself whether you want the movie and only the movie, which wound up a limp, break-even adaptation of an overwrought book about the kin of Christ. Watching the movie again -- and, really, who says this isn't work? -- only prompted nagging questions about Hanks' greasy haircut and Paul Bettany's contact lenses; really, the book wasn't this boring, was it? Remind me to ask my mom. -- Wilonsky

Homicide -- The Complete Series Megaset (A&E)
When massive boxed sets of TV shows hit the market, one can't help but wonder who would care enough to buy them. For this monster, there's an answer: anyone who's discovered the genius of creator David Simon through The Wire, currently playing out its fourth season on HBO. Also, it would help if that person is unemployed: With every episode of all seven seasons, plus a feature-length special and some Law & Order crossovers, you're signing up for nearly 100 hours of viewing (about two bucks an hour). Homicide used to seem like the weak sister of Law & Order, lacking the modular nature that has made the latter ubiquitous in syndication. Instead, you get a complex story about the nexus of crime, poverty, and politics, with a focus on treating cops as human beings. That might not translate into huge ratings, but it does lead to near-perfect DVD viewing. -- Jordan Harper

Strangers With Candy (Lions Gate)
Even cutting-edge comedy groups have the damnedest time turning their show into movies; for every Monty Python, there's a Kids in the Hall and a Mr. Show. And as Strangers With Candy shows, even Amy Sedaris, Paul Dinello, and Stephen Colbert ain't Monty Python. A prequel to the series in which Sedaris played an aging ex-con who goes back to high school, the movie isn't bad -- it's just not any better than picking any three TV episodes you could watch back to back. Sedaris is a rubber-faced comedy goddess, and Colbert, as a religious and closeted biology teacher, milks big laughs out of every scene he's in. But only the cameos from folks like Philip Seymour Hoffman and Matthew Broderick improve upon the show. -- Harper