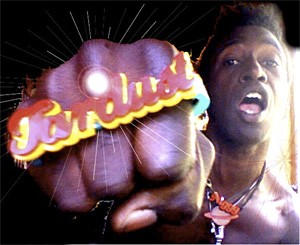 A few months after the November digital-only release of Saul Williams' latest album, The Inevitable Rise and Liberation of NiggyTardust!, Trent Reznor became disheartened. The Nine Inch Nails mastermind, who produced the record, thought he had hatched a genius Radiohead-esque plan for getting Williams' music to listeners: They could download the record for free, or they could pay $5 for higher-quality files. Perhaps not surprisingly, the overwhelming majority of the 150,000 downloaders chose the first option.

"[The record was] offered for an insulting low price," said a glum Reznor. "That's where my sense of disappointment is, in general — that the idea was wrong in my head, and for once, I've given people too much credit."

Williams, however, was thrilled with the project's results. The venerable rapper, actor, poet, singer, and spoken-word artist calls NiggyTardust an artistic and financial success. It introduced thousands of people to his music and generated ticket sales for his latest tour. Besides, the deal put money in Williams' pocket sooner than a traditional record release would have. "I would be living off an advance right now, rather than actually living off the proceeds of the album," he says.

And in a delicious twist of irony, paid downloads immediately spiked after Reznor bitched about nobody ponying up the cash. "All of these people were like, 'Oh my God, I loved the album. Now I actually want to go back and pay for it,'" recalls Williams, who believes part of Reznor's frustration stems from last decade's alt-rock boom. "I don't think Trent thought [my sales were] the worst thing that ever happened. He was just disappointed in what he already knew: The '90s are over. He put out music at a time when music sales were an all-time high. It'll be a long time before the music industry sees those type of numbers again. When one in five people pay for something, it's just realistic nowadays."

Even though NiggyTardust! is essentially an uncommercial work, it remains a compelling, atmospheric piece, an unclassifiable hodgepodge — called "ghetto gothic" by Williams — of hip-hop, dance, industrial, and rock music. The album plays loosely with the concept of David Bowie's The Rise and Fall of Ziggy Stardust and the Spiders From Mars, replacing Ziggy's gender issues with racial ones. The title character fights personal demons in a rocky, hallucinogenic landscape, borrowing themes from Williams' most gripping spoken-word performances along the way.

Williams is thrilled that the project let him circumvent the major-label process. Having suffered through the corporate game before — when he was signed to Sony at the top of the decade, the label's suits told him that his debut, Amethyst Rock Star, was "not hip-hop" enough — Williams believes NiggyTardust! confirms that the artist doesn't need to dumb down his concepts for people to grasp them. "It's been extremely empowering and insightful to realize that you're living in a time when integrity sells to kids," he says. "I might have executives telling me, 'The kind of music you're doing isn't going to speak to them.' That's being proven wrong by the kids out there."

The seeds of NiggyTardust! were planted two years ago, when Williams toured with Nine Inch Nails. Reznor was embroiled in a dispute with his deep-pocket record company at the time. He decided to swear off the big leagues once and for all with Williams and NiggyTardust! "From the start, I remember Trent saying, 'Let's give it away for free,'" recalls Williams. "At first I was like, This dude is out of his mind. But then it really started making sense. And, of course, with Radiohead doing it, we were like, What the fuck?"

Reznor was undoubtedly scarred by the NiggyTardust! pay-what-you-want experiment. Nine Inch Nails' new instrumental album, Ghosts I-IV, is available in a number of different download formats at various prices — but only the first nine tracks can be downloaded for free.

Williams says NiggyTardust!'s vivid imagery has had fans — both old and new — piling into his live shows. The sets feature plenty of high drama, special effects, and other Broadway-like stylings. Williams says the tour is a chance for him to tap his oft-unused theatrical background. "I'm a big believer in the role of theater in creating change and spectacle and entertainment, all at the same time," he says.

He's also gearing up for an old-school CD release of NiggyTardust!, which will include seven additional songs. According to Williams, the new cuts up the ante on an already explosive work. "I don't know if I did it on purpose," he says, "but the more I listen to them, the more I realize that I saved the most hardcore, the most dancy and thought-provoking tracks for the physical release. There's a lot of fun stuff."

Jump to comments (1)
« Feist has sung with a lot of Canadians. Unfortunately, she missed out on these classics.   |   Ne-Yo’s penned some of R&B’s biggest hits. Now, he’s keeping some for himself »