Sunday, March 30, at the Beachland Tavern.

By Eddie Fleisher
Why? indie-rock Beck 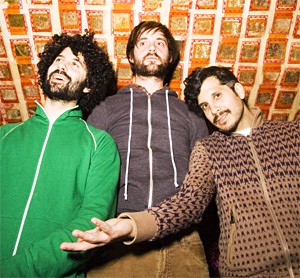 Why?'s transformation from artsy alt-hop experiment to full-time indie-rock band may come as a surprise to some listeners, but the signs were always there. Although 2003's Oaklandazulasylum was rooted in hip-hop, plenty of CD's guitar samples — as well as frontman Yoni Wolf's relentless shifts between rapping and singing — signaled greater aspirations. Two years later, the group — which formed in Cincinnati but has since relocated to California — released Elephant Eyelash, its first album as a band. The new Alopecia furthers the exploration. "I prefer working with musicians to doing everything by myself," says Wolf. "I really like doing the main tracks all at once with five guys. It makes the songs a lot more organic." Still, Wolf insists that the new CD is the "most rap-influenced record I have ever done. It's the first time I sat down and consciously written raps." Wolf delivers his rhymes in a lazy, nasally drawl, and Alopecia's hip-hop is more Beck than Aesop Rock. Says Wolf: "Music is always evolving and developing."