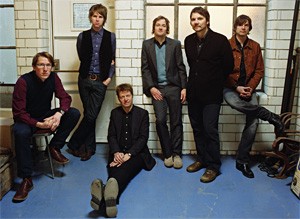 Wilco made the leap from alt-country traditionalists to Best Band in America about six years ago, right around the time Yankee Hotel Foxtrot was released. That CD — slated to come out in 2001, but famously rejected by a shortsighted record-company exec — perfectly captured the country's post-9/11 anxiety and paranoia. The album was recorded before the terrorists' attacks, but it's eerily prescient in its sound of dispirited Americana. Wilco hasn't looked back since. Last year's Sky Blue Sky downplays the atmospheric rattle and hum of Foxtrot and its 2004 companion piece, A Ghost Is Born, instead settling into a laid-back groove that's as expansive as its title implies. Frontman Jeff Tweedy has assembled quite a group for the latest Wilco incarnation. Guitar virtuoso Nels Cline, in particular, gives the band layers of textures and complexity that weren't even hinted at on the band's 1995 debut, A.M.