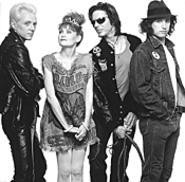 In 1976, hippies dominated fashion, forcing kids in places like L.A. and San Francisco to peg their jeans, rip their shirts, and spike their hair as a big middle finger to all that peace-and-love bullshit. Sweltering under the California sun, these kids were angry, grasping for something new and fresh -- anything that didn't stink of suntan lotion, patchouli, and surf wax. They wanted a revolution they could call their own. So they convened en masse at clubs like the Masque to enjoy the soundtrack to their frustration, as penned by such seminal punks as Black Flag, the Screamers, the Germs, the Blasters, the Weirdos, and the Go-Go's.

Among this horde of "the" fronted bands was a group simply known as X: bassist-singer John Doe, singer Exene Cervenka, guitarist Billy Zoom, and drummer D.J. Bonebrake. X embodied the rebellion and bored-stiff attitude of Los Angeles at the dawn of a new era. "We're Desperate," from 1981's Wild Gift, became the anthem for an entire youth subculture: "Every other week I need a new address/Landlord landlord landlord cleaning up the mess/ Our whole fucking life is a wreck."

Exene (born Christine) Cervenka -- poetess, underground icon -- helmed the ship. She moved to Los Angeles from Tallahassee in 1976, at a time when everyone was diving headfirst into the changing currents. "There was a 15-year period, from the mid-'60s up until the time I moved to L.A., where there was a radical movement against everything," 47-year-old Cervenka remembers. "It was an explosive time, and everyone felt it. The culture shock of coming from Florida to California was nothing, because it was such an exciting time. I was really young and a bit naive, but I embraced what I found." After attending a poetry workshop in Venice Beach called Beyond Baroque, Cervenka met future bandmate and husband Doe.

"We had to make a list of our top 10 poets, and I was sitting next to John. I kept cheating off his list," she laughs. "Making a living as a poet was the last thing anyone wanted to do. But the punk scene was just starting, and for me, the two just went together." After that chance meeting, Doe and Cervenka began writing songs together. Soon, craggy rockabilly fixture Billy Zoom and drummer D.J. Bonebrake joined, solidifying the lineup. X ate, drank, and embodied the L.A. lifestyle in the late '70s and early '80s.

The songs on X's 1980 debut, Los Angeles, and its follow-up, Wild Gift, are grainy, autobiographical bursts of anti-establishment voyeurism, sleaze, poverty, booze, sex, and dying in not-so-high society. The singers sounded like they were on the verge of either fighting or fucking, drawing from a love/hate relationship with each other, their city, and the house they reluctantly called home.

In Penelope Spheeris's 1981 L.A. punk documentary The Decline of Western Civilization, Cervenka took to the stage looking as if she had crawled straight from the glitzy gutters of Hollywood. Her hair was a rainbow crown of red, black, and bleached-blond streaks; her eyes lined like an Egyptian princess, wrists loaded down with bracelets. Of course, this made her screams of "Last night, everything broke!" even more enchanting. "Everyone in the scene was living pretty hard back then," she recalls.

Don't mistake her offhandedness for apathy. Cervenka has a right to sound jaded. The decline of the punk underground left many musicians clutching their anticipated revolutions to their chests for dear life. Maybe it was a bit of that aforementioned women's intuition, but X took a break in the mid-'80s, after the release of 1986's Ain't Love Grand. Zoom left the band and was replaced by Tony Gilkyson. Cervenka and Doe divorced, but continued performing together with D.J. Bonebrake in side projects such as the Knitters; meanwhile Cervenka and D.J. teamed up with Rancid's Matt Freeman in Auntie Christ. Cervenka also wrote two books, Virtual Unreality and A Beer on Every Page, and teamed up with Lydia Lunch for a third, Adulterers Anonymous. She produced several spoken-word albums such as Surface to Air Serpents and, in the late '90s, fronted the Original Sinners with ex-Distillers bassist Kim Chi and drummer Matt Young. In 1997, Elektra issued Beyond and Back: The X Anthology, compiling the band's best moments. "And then Tony quit, and we were like 'Now what?' We realized we needed Billy back in the band," Cervenka says. "Billy hated the music industry, but he was what we needed." Last year Rhino bankrolled another large reissue campaign, releasing the first five X albums with bonus tracks galore.

And so the story goes. X has come full circle, reaching the maturity that many bands of its era failed to attain. What does a woman who still lives and breathes L.A. punk think of the current "revival" and mass commercialism of punk rock? "You can't create something like that twice, no matter how hard you try," she says with a laugh. "Culture sucks again, like it did when we started playing. I don't particularly follow trends. I'm not going to make an electronic album. I still listen to punk music." And what about singing songs she wrote with Doe, when they were together? Isn't that close to Fleetwood Mac territory? "I don't live in the past, I don't get nostalgic, and I'm not 20 anymore," she declares with a casual exhale. "But it was sure as hell fun when we started out. Now, if I look into the crowd and see a young kid singing along, that makes my day."