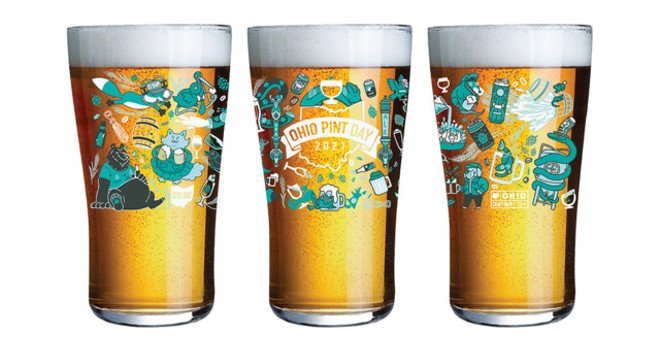 Ohio Craft Brewing Association
Grab a pint, get a glass

Over 150 breweries across the state and 22 in the Northeast Ohio area are participating in Ohio Pint Day on Tuesday, Sept. 28.

This is the second year in a row for the fundraiser where craft beer enthusiasts can support Ohio's craft brewing industry by purchasing a limited-edition pint glass.

This year's glass, featuring some adorable cartoon animals, was designed by Columbus-based artist Jessica Greving, who says about her work, "This pint glass is designed with the beer drinker in mind! It's meant to be a source of conversation as well as something interesting to explore."

One dollar from every glass will be donated to the Ohio Craft Brewers Association. Over 15,000 glasses will be available for purchase at the 150 plus participating breweries across the Buckeye State.

Each participating brewery will develop its own promotion around the Ohio Pint Day glasses; whether it be selling them individually, offering them at a discounted price with a beer purchase, or giving them away for free, you'll have to visit them to find out.

"Last year's inaugural Ohio Pint Day was a huge success, not just as a fundraiser for our organization, but also as a promotion for our member breweries struggling with the effects of the pandemic," said Ohio Craft Brewers Association Executive Director Mary MacDonald in a release. "We're so grateful that fans of Ohio craft beer have gotten behind this program and continue to support our state's independently-owned breweries."

All promotions begin on Tuesday, Sept. 28. Breweries that are not normally open on Tuesdays can open for Ohio Pint Day or offer the glasses on the next day they are open to the public.

Here's where to grab one around Northeast Ohio: