A Brief History of Cold Treats in Cleveland 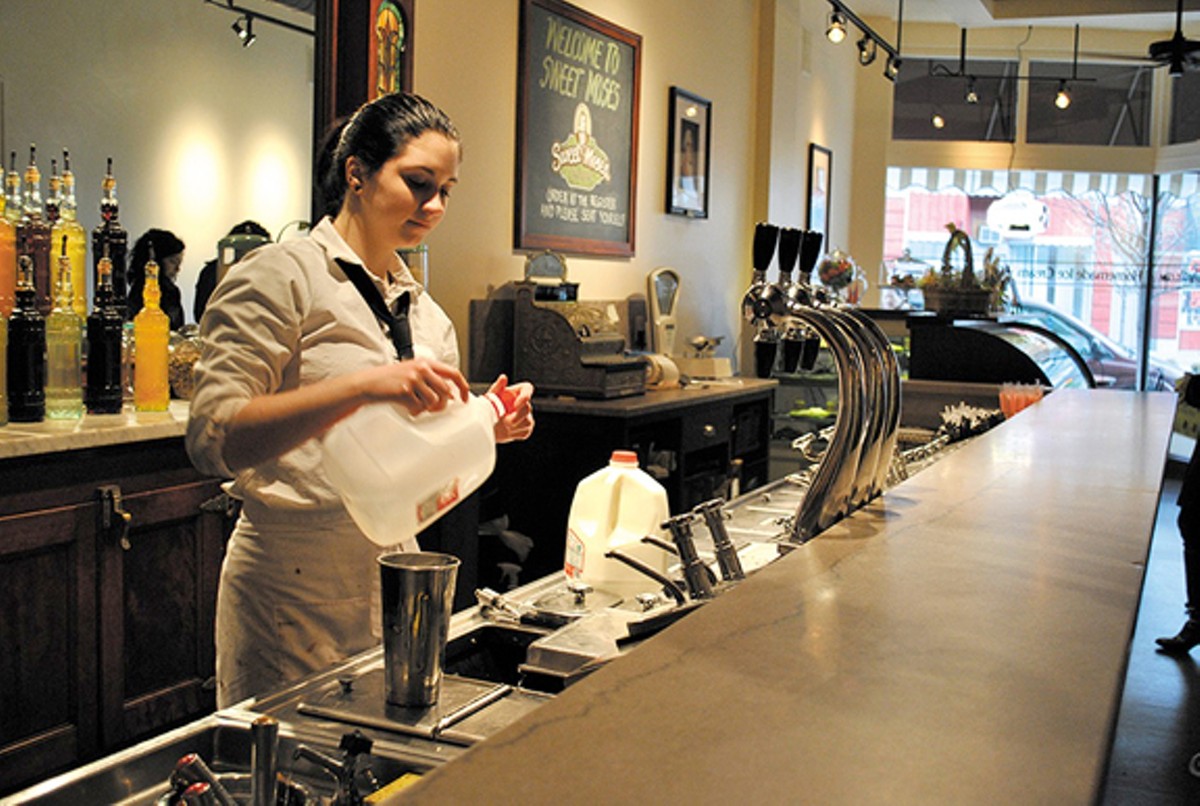 As the roaring '20s came to a close, freezers less adept for long-term chilling left the sixth most populous city in America ripe for the surplus of destination ice cream shops that catered to a dense body of downtown inhabitants. Advances may have changed the scene, but today's ice cream makers, from small-batch artisan to large-scale producers, look back fondly on the golden age for their day-to-day inspiration.

From 1930 to 1990, fleets of cyclists chimed through the streets peddling Louie Kaleal's Checker Bar Ice Cream. Though they halted production of their own blends in the '60s, Checker Bar still sells novelty treats and dry ice from its whimsical red-and-white-striped storefront on St. Clair Avenue.

"It's really fun to establish customers in different parts of the country," says current CEO Shelley Roth. "But we balance those opportunities with our most important market: our own backyard."

Pierre's wouldn't be the last local ice cream maker with staying power. As the population began spreading out thanks to electrified street cars, Frank and Marianne Page staked their claim on a small shoe store down the street from their Old Brooklyn home, which in 1974 they turned into the area's first Honey Hut.

"It's great that Cleveland has become this huge ice cream connoisseur area recently because it's really challenged us to up our game too," says director of operations Jonathan Rosati. "Instead of having the same stuff as we did in 1974, which may very well have happened, it forces us to think, 'What can we do that's new?' We have all these awesome competitors that are teaching the rest of Cleveland how great ice cream can really be."

East Coast Custard would join the league of cold treats in 1985, when the company opened its original Parma Heights location (now one of five), adorned with neon signs and flashing lights that recalled the Coney Island carnival scene where custard originated. In keeping pace with the times, they've since added an ice cream-based food truck to their repertoire.

The late '90s would introduce locals to Mitchell's, which pioneered local sourcing, dedication to sustainability and small batch production now encompassing eight locations throughout Cleveland. Mitchell's commitment to quality would resonate with another wave of artisan ice cream makers, who would emerge over the following decade.

The 2011 opening of the retro-inspired soda fountain Sweet Moses in Gordon Square marked a reemergence of ice cream shops nearer to downtown, even more so now that there's an outpost at Progressive Field. In 2012, Churned, an offshoot of the popular bakery A Cookie and a Cupcake, would follow suit in the already booming culinary destination of Tremont.

"People appreciate the old school-style handmade ice cream and really look forward not only to finding out how it's made and the ingredients used, but they're always surprised that we make it ourselves," says Churned co-owner SynDee Bergen.

A year later, food incubator Cleveland Culinary Launch and Kitchen planted itself in Midtown and helped foster two of the city's most beloved sweets businesses. Mason's Creamery and Chill Pop Shop shared workspaces only feet from each other and continued to stay in close proximity as they began infiltrating local farmer's markets.

"Suddenly there are all these new outlets and places of gathering. It was a whole movement at once," says Elizabeth Pryor, who co-owns Chill Pop with Maggie Pryor.

Though they've made a name for themselves peddling popsicles, the Columbus dwellers originally were inspired by the gourmet flavors of hometown legend Jeni's Splendid Ice Creams. When they relocated to Cleveland, they spun their love of farm fresh, seasonal flavors into bestselling pops like sea salt strawberry crème, watermelon lime and roasted peach.

This year, after amassing a loyal following of market-goers, Mason's Creamery took over the former Ohio City Ice Cream and Dari Delite storefront, where they offer 16 new flavors each week, 25 percent of which are vegan.

In 2014, Picadilly planted itself in the booming University Circle neighborhood. Using chilly liquid nitrogen, employees whip up organic-based ice cream to order in front of customers.

Across town on the westside, Marissa Flynn, who says she was inspired by Chill Pop and other makers, is the newest entrepreneur hoping to build on the chilled sweets momentum. Her shop, Ice Cream Joy, just opened in Lakewood and they've already begun scheming up concoctions.

"We're all bringing back the old-fashioned spirit," says Flynn. "But with a new twist."