At Steak on a Stone, the food pops, but everything else fizzles. 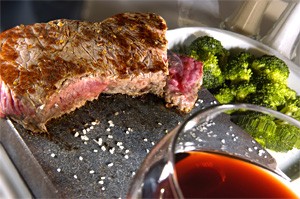 Walter Novak
Food fads or not — these steaks are damn fine.

Like a little sizzle with your steak? Try tossing a hunk of rosy Black Angus beef onto a 750-degree slab of volcanic stone. At those temperatures, even a thick cut, like our 12-ounce New York strip steak, sears in seconds, popping and sputtering beautifully on the way. Flip it over once or twice, and it's a juicy medium-rare — ready to be removed from the stone (to stop the cooking), sliced into bite-size morsels, and dipped into one of 15 or so homemade sauces for a little add-on zing.

That, basically, is the Steak on a Stone experience. The restaurant was born out of a European cook-it-yourself dining fad that's been making occasional appearances on the U.S. scene for years. It arrived on the North Coast in June at the former Kristofer's in North Olmsted, where it provoked a name change and became a popular addition to the menu of Mediterranean and Greek cookery, a lineup that includes items like saganaki, chicken Marsala, and braised lamb shanks.

It's a gimmick, to be sure, and like fondue, it doesn't really pay to think too deeply about it. That would elicit potentially painful inquiries like "Why, exactly, am I paying for the privilege of cooking my own food?" These are questions better left unasked.

But the old adage "Sell the sizzle, not the steak" applies here, and the sight, aroma, and sound of that searing meat make for a profoundly atavistic pleasure, one that's worth sampling at least once or twice. (The stone, incidentally, continues to radiate waves of heat for hours, making this a potentially dicey dining proposition for small children and menopausal women.)

Thanks to top-quality ingredients and the speedy sear, the steak's flavor is first-rate, as rich and tender as any carnivore could crave. Same goes for the plump, boneless duck breast, an ample 14- to 16-ounce portion with a luxurious mouthfeel and slight gaminess. Other stone-worthy possibilities include filet mignon, rib-eye, and sirloin steaks, along with pork tenderloin, chicken breast, shrimp, and scallops. (However, given the short cooking times, we suspect it would be ridiculously easy to overcook those final two items.)

Each meat is accompanied by a choice of two mildly seasoned dipping sauces, including béarnaise, creamy garlic, Bing cherry reduction (a fine accompaniment to the duck), and satiny mushroom-Cabernet, rife with hints of rosemary. Also part of the package is your choice of two sides, which can include salad, veggies, homemade soup (consider the well-balanced avgolemono, a classic Greek chicken-and-rice soup, piqued with egg and lemon), or spuds (go with the oven-baked Greek style, zapped with oregano, lemon, and imported EVOO).

Prices are a bargain, ranging from $12.50 for that boneless, skinless chicken breast to $24.95 for an eight-ounce filet mignon. Apps (like four breaded but slightly chewy sautéed shrimp in lemon butter) and desserts (including the small, silken portion of homemade crème brûlée) are extra. The restaurant also offers a full bar and an approachable annotated wine list, which mostly features bottles pegged at $25 or less; co-owner and wine guy Rodger Nicholson has an eye for value and is constantly expanding the selection.

Sadly, when it comes to other aspects of the dining experience, the sizzle starts to fade. Among the less-than-sexy elements is the location: a small Lorain Road strip mall that offers plenty of free parking but little else. Likewise, while the restaurant's interior is perfectly neat and tidy — with white tablecloths, real cloth napkins, and plenty of windows overlooking said parking lot — the dining-room decor is best described as inoffensively bland. Background music, some colorful artwork, and spicier window treatments could work wonders here.

"Blandly inoffensive" could apply to the Sunday brunch buffet, a mostly routine lineup of scrambled eggs, French toast, silver-dollar pancakes, sausage, baked chicken, dryish slices of roast pork and roast beef, and predictably limp pasta primavera, all set over steam pans. Crisp romaine salad, fresh fruit, homemade bread pudding, rice pudding, and slightly soggy galatobouriko — a custard-filled phyllo pastry — round out the mundane offerings. On the upside, everything seemed fresh and wholesome; the buffet tables were kept clean and well replenished; and in a town where $30 Sunday brunches are not unheard-of, the $9.95 price tag is obviously an affordable alternative.

Weeknight service didn't wow us either, thanks to a waitress who rushed us, then ignored us, then seemed to wish we would just stop bothering her in her place of employment. A few sample exchanges:

Us: Does the kitchen make any of the dipping sauces from scratch?

Her: I don't work during the day. I have no idea what they do in there.

Us: Can we get a copy of our itemized bill for our records?

To his credit, co-owner George Servetas seemed to take our post-dining input seriously and says he will implement the necessary corrections. No word on whether that will include replacing our server — or at least renting her a personality. After all, in a place this promising, the sizzle shouldn't be limited to the steak.