After 20 Years on Lee, Parnell's Pub Moving to Cedar-Fairmount

After 20 years in the same location, Declan Synnott is relocating his bar. Parnell’s Pub (2167 Lee Road, Cleveland, 216-321-3469), opened two decades ago as the Charles Stewart Parnell's Pub, will be moving down the hill to the Cedar-Fairmount neighborhood of Cleveland Heights. Synnott is currently renovating the former Ten Thousand Villages space (12425 Cedar Rd.), which closed a couple months ago, into the new home for his beloved Irish pub. 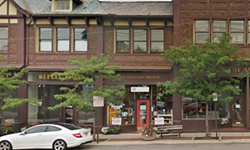 Future home of Parnell's Pub
“We were looking to renovate the [old] space but it would have been impossible because of all the codes,” Synnott explains. “I decided that I really didn’t want to leave the Heights because this is where I started, but we wanted to start something fresh. This opportunity was there and I jumped on it.”

Four years ago, Synnott jumped on another opportunity when he added a second location, this one in Playhouse Square (1415 Euclid Ave., 216-862-8953). That location has exceeded his expectations, resulting in an expansion of the space last year.

At 1,000 square feet, the new space is not considerably larger than the current one on Lee, but when the dust settles and the renovations are done it will accommodate about 16 more customers in a more comfortable environment.

“This is the first time we’re doing our own build-out,” the owner adds. “We walked into downtown and kept it the way it was,” he says. “We’ll be blending elements of Lee Road with aspects of downtown; there will be a brick backbar with old mirrors and antiques, some cool barn doors.”

When it opens in early October, Parnell’s might look different and sport a new address, but it will still be the same old Parnell’s Synnott promises, citing attractions like live music, World Cup soccer, darts…

“All the stuff that we’ve been doing,” he says. “You know what we are; we’re just a pub. Why change what’s been working for 20 years. We’re moving the four walls, but that doesn’t mean we’re changing the atmosphere.”

Over the years, Parnell’s Pub, which opened in 1997, has expanded, remodeled, contracted, and added a second spot. Synnott, who moved here from Dublin to work at Flannery’s Irish Pub, says that he adheres to the motto of change or die.

“You need to change and adapt with the times or you’re not going to make it,” he says. “We’ve seen the ups and downs, the bads and goods; it’s time. We’re moving forward after 20 years.”