At Willoughby’s Burgers-N-Beer, the name says it all 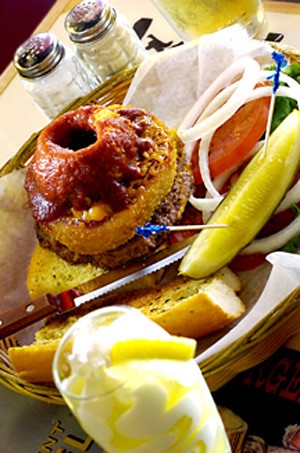 You've got to hand it to Burgers-N-Beer owner Doug Ciancibello: In an era when restaurant names seem chosen more to mystify than to enlighten (who, exactly, is Lola, and what the hell is a Parallax?), the owner of this eight-year-old Willoughby tavern lays it all out, right in the name.

Then there's the beer, plenty of well-priced options that include the usual bottled domestics ($2.50), a solid lineup of imports and craft brews ($3.50), and frosty pints of Bass, Killian's, Dortmunder Gold, and Blue Moon, at a bargain-priced $3.50.

(Philistines may also note the lineup of martinis, frozen cocktails, spirituous coffees, and inexpensive grocery-store wines. But the joint isn't called Burgers and a Cosmo, is it?)

Granted, you don't need a bar to dig life's two best Bs. Odds are, most of Northeast Ohio has been indulging in those very pleasures on decks, patios, and in picnic pavilions since the first warm day of spring. But what the DIYers miss is this: the tavern's old-time charm, cheery atmosphere, and prompt, friendly service — all seemingly designed to make a midweek dinner feel like a getaway at a lakeside resort.

Even from the sidewalk, the tavern looks like fun, with its red awning, red window boxes, and big American flag. Push through the swinging saloon-style double doors (also red), and you find yourself in the middle of a lively, energetic, and comfortably crowded space that seems as suitable for after-work unwinding as it is for families with squirmy kids.

Crowded-together tables are little works of art, each topped with a collage, a colorful poster, or a freestyle abstract painting. In fact, ours was a vibrant swirl of yellow, blue, and red, with images that alternately suggested an iguana, a foot, and — we're not making this up — a pickle with legs! Pulled up to each table are dainty bentwood chairs, the stereotypical "ice-cream parlor" seating, upholstered in red, chartreuse, or aqua vinyl. And should your fellow diners — everyone from guys in suits to a couple in full biker regalia — not prove entertaining enough, there's a jukebox stuffed with classic rock, a couple of tellies tuned to sports, and a handful of video games.

Not that we discovered many breaks in the action. Service was remarkably attentive, particularly considering the tavern's prices. So even with a couple of rounds of beer and a dessert — the unexpectedly yummy Limoncello Flute, a refreshing, mousse-like concoction of lemon gelato, meringue, and whipped cream, served in a champagne flute that's yours to keep — getting in and out takes barely an hour. (Complimentary valet parking on Friday and Saturday evenings is another smooth move.)

Against all this high-energy hoopla, the simple food is as welcoming as the restaurant's name. Take those Angus beef patties: lean, tender, and basking in the glory of the generously applied toppings. The large, unusual buns — lengths of soft French-style bread, slathered with garlic butter and gently toasted to a golden brown — add savor. Just beware the potential for undercooking: Ordered medium well, two of our burgers showed up rare on one occasion.

Still, the best bets included the Burger Boy, a spot-on rendering of the Big Boy classic, with finely chopped lettuce, American cheese, and a zesty, seasoned mayo. Also consider the towering Western Burger, groaning beneath the weight of two mammoth onion rings, oodles of shredded cheddar, and a small lake of barbecue sauce: messy, but worth every splatter.

A starter of large, slightly chewy wings was decent, although their best feature was probably the aromatic Mimi's Original sauce, a mouthwatering blast of sweet, tart, and clovey sensations, based on a secret family recipe. The sauce was also the highlight of the tender but otherwise unremarkable St. Louis-style ribs.

A huge half-and-half order of spiral-sliced white- and sweet-potato fries proved rather limp, sort of greasy, and not terrifically compelling, at least until we perked them up with salt and malt vinegar. But the battered and deep-fried green beans made a tasty change of pace: not health food, by any means, but not a bit greasy, and providing an appealing contrast between the plush veggie and its crunchy outer shell.

Like the place's name, nothing complicated about any of it. But sometimes, that's just what it takes.