Back in the Hi Life 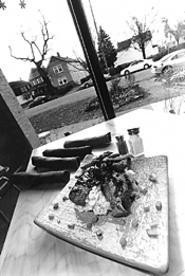 Walter Novak
The Hi & Dry -- and Tremont -- has seen a lot of changes, but the food hasn't suffered for it.

It's the economy. It's the influx of new restaurants. It's the phases of the moon. Who knows why business has been off at Tremont's venerable Hi & Dry In? But this much we do know: When we last visited the tavern in the fall of 2000, the funky neighborhood hangout was jumping. A wacky and gregarious clientele, ranging from hard-bodied, pink-haired punks to paunchy middle-aged hippies, crammed the bar at lunch and dinner. Live jazz rocked the old brick walls every weekend. And chef Chuck Mosley's repertoire of spirited global cuisine, if not always perfectly executed, was ambitious, intriguing, and innovative.

At the time, caterer Mark Pariano had recently purchased the thriving business from restaurateurs Jeff Eisenberg and Mike Weigand (who went on to buy Ohio City's Heck's and recently opened La Bodega, an arty little sandwich shop around the corner from the Hi & Dry). Pariano and his staff seemed intent on ratcheting up the tavern's reputation a notch or two. But, well, you know what they say about the road to hell. By October of last year, Pariano and Mosley were both history, and the Hi & Dry was back in its former owners' hands.

For the next three months, Eisenberg and Weigand scrubbed the place out (cleanliness never being Pariano's forte), redecorated, took the menu back to its casual roots, then began waiting for the hungry hipsters to reappear. At this point, the owners say, business is finally picking up; but if two recent visits provided an accurate Polaroid, the crowds have yet to return in force.

Oh sure, it's nice that those tedious two-hour waits for a table appear to be a thing of the past (especially if you get in before 9 p.m.), and that when the kitchen runs out of vanilla ice cream, staffers have time to mosey down to the convenience store on West 14th to pick up a gallon. During a weeknight visit, bored servers seemed positively giddy at the prospect of brewing a fresh pot of decaf, and passed the time by giving impromptu backrubs to regulars. Still, it's a downer to see the kitchen staff leaning on their elbows at the bar, eating their own cooking and dragging on a smoke, or overhearing a tip-hungry server mull over plans to snare a job at Lola.

It's too bad, because the Hi & Dry still possesses all the basic requirements for a cool neighborhood haunt. The dimly lit decor is a blend of Greenwich Village coffeehouse and retro rumpus room, done up in a dusky palette of salmon, seafoam, and aquamarine that seems to have been lifted right off a collection of Fiesta Ware. Eames-chair knockoffs are curvaceously inviting, and votive candles flicker from niches in the old brick wall. The moderately priced wine list is small (13 whites, 14 reds, and a quartet of bubblies) but interesting, and the selection of beers is more than adequate. Friday- and Saturday-night bands don't start rocking until 10 p.m., but the rest of the time, a 60-disc CD player serves up a random play list of tasty tunes from Moby to the Kinks. And while lunch service has been suspended, and the kitchen no longer whips up numbers like grilled duck breast with peach risotto, standards like the juicy, eight-ounce Tremont Burger, topped with melted cheddar and saucy grilled onions, piled on a toasted pumpernickel bun, still remain.

More important, food portions are generous, prices are reasonable (with salads and sandwiches under $10, and no entrée breaking the $20 mark), and the dishes are vastly superior to ordinary bar fare. Consider, for instance, the four tender-crisp batons of grilled asparagus garnishing an open-faced chicken breast sandwich, or the colorful confetti of peppers and carrots that encircled a sliced pork tenderloin special. The house salad -- which accompanies all entrées -- is a toss of fresh, flavorful greens, sweetly and unexpectedly piqued with bits of dried plum; tangy Gorgonzola vinaigrette is a perfect flavor foil.

Veggie fans have reason to cheer, too. Crisp, golden risotto cakes arrive topped with surprisingly luscious tomato-and-herb compote and seductively draped with limp, smoky grilled scallions. A health-conscious companion raved about a grilled vegetable platter, with balsamic-brushed slabs of zucchini, red pepper, eggplant, onion, and portobello mushrooms on mixed greens; he also loved the pungent punch of garlicky hummus, served with chopped tomato and onions, and wedges of pita. And five enormous shrimp poppers -- medium-sized shrimp, along with cream cheese and bright red pepper, encased in a thick, coarse breading and deep-fried to a towering crunchiness -- were obviously frozen-food items, but at least avoided the jalapeño-poppers cliché and accompanied a glass of crisp French Vouvray ($5.25), as well as a mug of Old Speckled Hen ($4 on draft).

Still, it wouldn't have hurt if the kitchen had used a slightly heavier hand when laying down honey-barbecue sauce onto a tender but flavorless pork tenderloin; most of the excitement on this particular plate came from the creamy mashed sweet potatoes and a garnish of buttery sautéed carrots and yellow squash. The same problem plagued our Greek Chicken, a skinless, boneless grilled breast settled on a thick slice of grilled ciabatta: Although we could see what looked like pepper and herbs on the meat, the only real gustatory punch was to be found in the zesty chopped green and black olives, sliced artichoke hearts, and strong feta.

As has ever been the case, desserts are mostly an afterthought at the Hi & Dry, where those with an insistent sweet tooth must make do with a small selection of goodies brought in from commercial sources. We passed on the pumpkin and apple pies, settling instead for a big, gooey pecan bar topped with vanilla ice cream. (It was this particular order that sent a staffer to a nearby grocery store.) It was pretty good stuff, and as we nibbled, we amused ourselves by studying the handful of bar patrons. To our right, a wiry little senior in a fluffy pink stocking cap was nursing a giant mug of coffee. To our left, a broad-shouldered, ponytailed skater, decked out in helmet, Lycra tights, and a reflective vest, rolled up and ordered a beer. Between them sat a fidgety middle-aged guy in a sports jacket, a young woman in head-to-toe leather, and a fresh-faced couple engaging in an intense round of footsie. Seeing such a display of diversity made us feel all warm and snuggly inside. The Hi & Dry clientele may be smaller at the moment, we agreed. But the place, it's good to see, still mixes it up as well as ever.