The Winking Lizard's the place for scaling new brew heights. 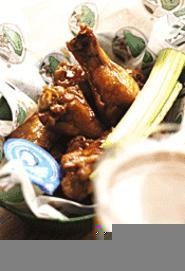 Walter Novak
Wing-a-ding-ding! The Lizard's gotcher party platter down pat.
You say your Christmas gifts were lame, the trip home was a nightmare, and the only promise the New Year holds is FAFSAs, tax forms, and Visa bills? Dude, you need a beer.

Or maybe an entire world's worth of them -- call it a "World Tour of Beers," if you will -- composed of 100 first-rate brews culled from crafters around the globe. Maybe turn it into a contest: Start working your way through the list, in any order, right after the first of the year; and if you manage to toss back the final brewski anytime before year's end, you'll be invited to a party and snare some cool swag. Of course, downing all 100 beers requires some pretty intense commitment. Then again, you did say you were searching for a meaningful project to tackle in 2006, didn't you?

While we would love to take credit for such a cool idea, honesty compels us to admit that the good folks at the Winking Lizard Tavern came up with the concept more than 20 years ago, and they've been refining their popular World Tour ever since. This year's trip begins on January 16, and nowadays, quality is as important as quantity. Organizers put considerable effort into choosing an intoxicating mix of premium brews, in dozens of styles, that are as educational as they are, uh, refreshing.

Pilsners, lagers, maibocks, and hefeweizen . . . Even if you don't know your pale ale from your porter when you set out, you'll be spouting wisdom like a tipsy brewmaster by the time you reach the end. Simply head to your favorite Lizard locale, plop down 10 bucks, and take possession of your guidebook and a list of the beers to help you plan your itinerary. (And don't forget your magnetic swipe card: This year, the tour finally goes high-tech, so no matter where you do your drinking, it will be credited to your record.)

In fact, the biggest hurdle in all this may be deciding where to sign up. The original Winking Lizard, in Bedford Heights, first blinked its eye back in 1983; today, there are a dozen outposts in towns ranging from tiny Peninsula to Columbus, Lakewood, and Cleveland Heights. Unlike many national chains, Lizards eschew a cookie-cutter appearance and attitude. As a result, while the menu -- and the beer selection -- is standardized from one tavern to the next, each one hums with its own distinct character.

At Gateway, that character turns out to be an energetic amalgam of restaurant, sports bar, and neighborhood watering hole, wedged into a triangle of space inside the historic flatiron building between Huron and Prospect Avenue, within easy walking distance of both the Q and the Jake. A rambling, almost mazelike layout serves as backdrop to two full bars, five dining areas, and one very large iguana named Crash; banks of flat-screen TVs, a handful of videogames, a popcorn machine, and an ATM round out the amenities.

Even for those peculiar souls who choose not to see the world through the business end of a beer mug, this Lizard has a lot to offer, as demonstrated by its wide-ranging clientele. During a weekday lunch-hour visit, for instance, the spot was rocking with business-guys and -dolls chowing down on salads, soups, and sandwiches. On a Friday night when the Q was in standby mode, knots of TGIFers kept the party hopping and the beer taps flowing until late into the evening (last call at the Lizard comes at 11:30 on weekends, by the way). And during games and concerts, suburbanites flock here, knowing it's a welcoming, family-friendly spot for pre- or post-event noshing.

Although most of the tour beers are bottled, another 15 or so are available on draft, by the pint, the 22-ounce pour, or the pitcher. Never ones to shy away from a challenge, the bartenders also orchestrate four different Guinness-based duets, including not only the familiar Black & Tan (half Guinness and half Bass), but also the Black & Blue (half Guinness and half Labatt Blue), the Black & Gold (half Guinness and half Great Lakes Dortmunder Gold), and the whimsical Cream of Wheat: a hearty, sweet-tart twosome of Guinness and Hoegaarden. There's also a separate menu filled with trendy martinis, cocktails, bombs, and frozen drinks; and for those who don't know any better, there's a very basic list of inexpensive wines. (These would probably be the same people who order burgers at the Chinese restaurant.)

To go with, the long, all-day menu is crammed with pretty good variations on traditional American pub grub, including burgers, ribs, wings, chicken, and pizza in dozens of guises. For vegans, vegetarians, and anyone devoted to maintaining free-flowing arteries, pickings are admittedly a little on the slim side. Bacon, cheese, and sour cream are ubiquitous; even the house salad comes topped with corned beef; and when a meatless companion finally settled on a veggie-wrap sandwich, the ho-hum combo of shredded lettuce, cheese, and raw mushrooms, onions, and peppers, tossed in parmesan-peppercorn dressing, left him feeling sort of hollow inside.

Still, for those of us who at least occasionally enjoy gnawing on bones and wiping grease off our chins, a meal here can be a guilty, finger-lickin' pleasure. Tops on our list of savory indulgences are the signature wings: fresh, plump tidbits available in a choice of 12 different sauces, including mild, hot, 911, BBQ, Cajun, and the not-too-fiery but plenty zesty Caribbean Spice. (A Thai-style sauce, with hot sriracha, will debut shortly.) Crunchy-crisp outside, juicy within, and tender as all get-out, these bad boys are repeatedly named the best wings in town, to the surprise of no one.

Thick, meaty, tongue-tickling chili is a top performer too, with a vibrant but not painful blend of peppery seasonings. Like many of the menu's mainstays, the chili is made in the chain's Bedford Heights commissary and shipped to the taverns daily. That's probably how it happened that our first bowl arrived at the table still cold; happily, once we brought the chilly chili to our server's attention, she quickly had it replaced with some really hot stuff. For the best effect, order it topped with chopped onions and shredded cheddar, with sour cream on the side.

While he doesn't do wings, our vegetarian pal gave thumbs up to the pizza dippers, one of several new menu items. Long batons of tender pizza dough, filled with mozzarella and then deep-fried to a burnished bronze, the dippers were just right for scooping up mouthfuls of well-balanced marinara. However, a second new menu addition, the ranchero wrap, proved considerably less satisfying. The grilled pork filling was a little too chewy and -- worse -- inexplicably bland, especially since the menu description had promised a feast of enticements such as "sherry," "cumin," "cilantro," and "jalapeño."

For sandwich lovers, a better bet might be one of the Lizard's eight-ounce, freshly ground burgers. We had ours topped with bacon and melted American cheese (Bo-man's Bacon Cheeseburger), with fluffy, crisp-edged steak fries on the side. For the full effect, though, try substituting an order of Pfred's Preferred Fries. Smothered with melted cheddar, mozzarella, and crumbled bacon, these little fry guys have sock-rockin' attitude -- not to mention calories! -- to spare.

While not big sellers, pretty good desserts can wrap up a Lizard stop with a big, sweet kiss, especially if there are kiddies in tow. Bananas Foster ice-cream cake (really more of a pie, with a vanilla-cookie crust and cinnamon drizzles) was clearly a commercial product, but its cool, creamy essence still put a smile on our lips. And a chocolaty seasonal special -- Midnight Ecstasy Cake -- might not have been a culinary masterpiece, but the huge, flanking scoops of Pierre's peppermint ice cream could have made even a W-2 taste delish!