A French master of fromage shows us how it's done. 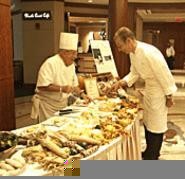 Walter Novak
Side Dish gets schooled in cheese by a genuine French person.
Italians have their asiago; the Spanish, their manchego. For us, good Lord, it's Velveeta. But when it comes to producing cheeses of extraordinary flavor in mind-boggling variety, the French blow away the competition.

To make sure we remember that, master cheesemaker Claude Lauxerrois, of Ferme Jehan de Brie in France, has been crisscrossing the globe, promoting the Selles sur Cher, Reblochons, and camemberts of his native land.

In a recent visit to Cleveland, Lauxerrois presided over a series of cheese-and-wine tastings at Classics (9801 Carnegie Avenue, in the InterContinental Hotel and Conference Center). A longtime comrade of Classics' Chef du Cuisine Guillaume Brard (pictured right), Lauxerrois offered a dreamy lineup of goodies, ranging from a mild Maconnais (a soft goat's-milk cheese) to a breathtaking Roquefort so profoundly rich, it dissolved on the tongue like butter. (And paired with a Portuguese 1964 Quinta do Noval port, by the way, it was a nearly religious experience.)

Lauxerrois and Brard proved eager to help plot tasting strategies, starting us off with mild goat cheeses like the Selles sur Cher, then moving on to firmer, more piquant varieties like Comte (a cow's-milk cheese similar to Gruyère) and finishing up with the pungent, funky Roquefort; palates were cleansed with wine and bread in between. As for deciding on the proper wine, they suggested choosing one produced in the same geographical region as the cheese, a terroir-based approach that provides the most provocative interplay of flavors.

Old-time taste . . . Fans of traditional Hungarian sausages took it hard when Robert Kaczur passed away last year. After all, his tiny butcher shop in downtown Bedford (R. Kaczur Meats, 712 Broadway Avenue) was about the only remaining spot east of the Cuyahoga that offered such once-commonplace Old World delicacies as smoked kolbasz (a 100 percent pork sausage), hurka (rice-and-liver sausage), and abalt szalona (boiled bacon that can be sliced and eaten without additional cooking).

But just when Kaczur's fans figured they'd had their final taste of garlic-cured fatback, family friends Brad and Niki Miller took over the shop -- along with Kaczur's traditional Hungarian recipes and techniques. The couple, who both boast culinary degrees from Johnson & Wales, reopened the market in February, with the same commitment to homemade quality and freshness that had made Kaczur's so popular. In addition to the fragrant bacons and sausages, the Millers sell fresh meats (including freshly ground beef), brats, knockwurst, salami, skinless wieners, and Eastern European herbs and spices.

Booritos . . . Time to dust off the foil suit and head over to your nearest Chipotle Mexican Grill. Customers who come in on October 31 dressed as their favorite menu item will be treated to a free burrito. Twenty bucks' worth of costume supplies should be enough to score the $5 freebie.