Melt piles on the proof that not all sandwiches are created equal. 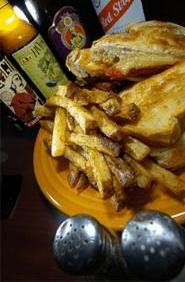 Walter Novak
Dig in -- the diet starts tomorrow.
From silken Brie on a crusty baguette to shiny Velveeta between slices of bouncy "balloon" bread, there's just something about the combo of cheese plus bread that cuts across time, culture, and possibly even species. It's one of the most elemental comfort foods on the planet.

Hyperbole, you scoff? Then clearly you didn't observe the posse that joined me at Melt Bar and Grilled, musician and food-industry vet Matt Fish's newly opened grotto of grilled cheese, inside Lakewood's former White Door Saloon. Normally bright eyes suddenly went glassy, normally sharp tongues began to loll and drool, and one erstwhile adult seemed to speak for all when she let out a dreamy sigh, like an ingenue invited to the dance floor: Lunch at Melt? I thought you'd never ask!

No, if there were a smarter example of niche marketing than Melt, you'd be hearing about it in Savage Love, not here. On the other hand, the sheer visceral pleasure of diving face first into a perfect grilled-cheese sandwich, with its heady interplay of tongue-tickling sensations -- well, let's just say that there's a reason food and passion sometimes share the same language.

Of course, it goes without saying that the multi-talented Fish, whose résumé includes five years as kitchen manager at Ohio City's Johnny Mango, hasn't created just another ho-hum sandwich shop. Sanitized decor, uniformed servers, and coolers filled with Nantucket Nectar have no place here. Instead, Melt oozes a slightly edgy vibe, from its pierced-and-inked staffers to the well-stocked bar, with its top-shelf booze, inexpensive quaffing wines, and bodacious beer collection, featuring more than 100 offerings in the bottle or on draft.

To narrow the choices, Fish thoughtfully provides a neatly organized beer menu, divided by place of origin and style; both price and alcohol content are included too, making it possible to stay within budget and within the parameters of personal endurance. Among the current temptations, Great Lakes Brewery's unbeatable Christmas Ale ($5) merits a spot atop the to-do list.

It's the freshly prepped edibles, though, that are the big draw -- especially the 20 or so variations on a theme of grilled cheese, piled onto thick slabs of dense Italian bread from Lakewood's Bavarian Pastry Shop. Amply filled and griddled to buttery-crisp perfection, then finished in the oven to ensure an even melt, these are two-fisted monsters with hearts of golden goodness. A few, like the Kindergarten (your basic match-up of bread and cheese), are spare and simple. Others, like the Parmageddon -- a plump pierogi, smothered in cheddar, grilled onions, and homemade kraut kissed with vodka -- are like a polka party on a plate. Still others -- and here, we're recalling the sweet and gooey Mushroom Melt, with thick slices of woodsy, stir-fried portobellos, caramelized onion, and melted provolone -- are manna for the meat-free contingent.

Other winning combos abound. Chorizo, potato, and sharp cheddar? Delectably rich and spicy. The overstuffed Hot Italian, with salami, ham, pepperoni, sun-dried-tomato pesto, roasted garlic, and provolone? Like first-rate pizza, but better. In fact, only the feta-filled Spinach Pie drew anything less than rave reviews: Not only were the roasted red peppers and grilled onions in somewhat short supply, but without a cheesy binder (feta being notoriously stubborn about melting), the filling tended to flee the bread at the slightest provocation.

All sandwiches arrive on colorful platters, with mountains of freshly cut fries and hillocks of sweet-and-peppery homemade coleslaw. Such savory largess makes the notion of a starter -- nachos, pierogies, quesadillas, and the like -- seem mostly unnecessary. Still, pairing up grilled cheese with a mug of homemade soup has appeal, and Melt's kitchen turns out some decent options. Among them, spicy peanut was thick, hearty, and suitably fierce, if a little flat on the finish; and vegetarian three-bean chili, topped with shredded cheddar, sour cream, and diced scallions, served up plenty of deep, slow-cooked flavor. Even the roasted garlic and tomato version hit the spot.

Salads (most topped with cheese), burgers (ditto), and cheesesteaks (duh) help round out the menu, not to mention the clientele.

Speaking of which, it should be obvious that none of this is health food; but when something tastes this good, such concerns can be overlooked, at least occasionally. More troubling, though, may be the tavern's air quality. At least on a bustling Thursday night, the combination of secondhand smoke and airborne cooking fumes sent us home smelling like deep-fried ashtrays. (In light of the recent passage of Issue 5, however, this soon may prove a moot point.)

Desserts include cheesecake (natch), chocolate Guinness cake, and an anticlimactic version of deep-fried Twinkies that didn't seem indulgent enough to justify the calories.

As it turned out, though, even that wasn't enough to dampen our ingenue's enthusiasm. "It was everything I hoped for," she cooed, as we dropped her off at the compound after lunch. In the face of such infatuation, who are we to let a mere Twinkie stand in the way?