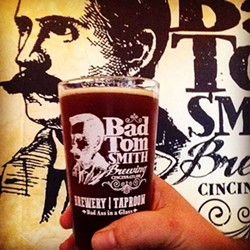 Update: After a series of setbacks and delays, including a string of break-ins, Bad Tom Smith is ready to open its doors in Ohio City.

That will happen on Dec. 4, a week from this coming Monday.

The taproom, located in the former Weenie a Go Go space, will feature a range of options including a monthly, rotating homebrewer selection.

(Original story 12/22/16): There’s been chatter on the street that Bad Tom Smith Brewing Co., a small Cincinnati-based brewery, was looking to plant a flag in Ohio City. The plan, as laid out by the Cincinnati Business Courier this summer, was for owner John Vojtush to ultimately open taprooms in Louisville, Dayton, Pittsburgh, Eastern Kentucky and Northeast Ohio.

Now we know when – and where – that Northeast Ohio taproom will open.

Local operator Stephen Fellows said that the process of converting Weenie a Go Go (1836 W. 25th St.), a former hot dog diner, into a small brewery and taproom has already begun. The goal is to be open and pouring by St. Patrick’s Day.

When it opens, Bad Tom Smith will be brewing beer on site on a four-vessel, three-barrel system as well as shipping in beer from its Cincinnati brewery. Bad Tom’s Cincy-based master brewer will work with a crew of local brewers.

When it opens, the taproom will join local breweries Great Lakes, Market Garden Brewery, Nano Brew and Hansa Brewery in the immediate vicinity.