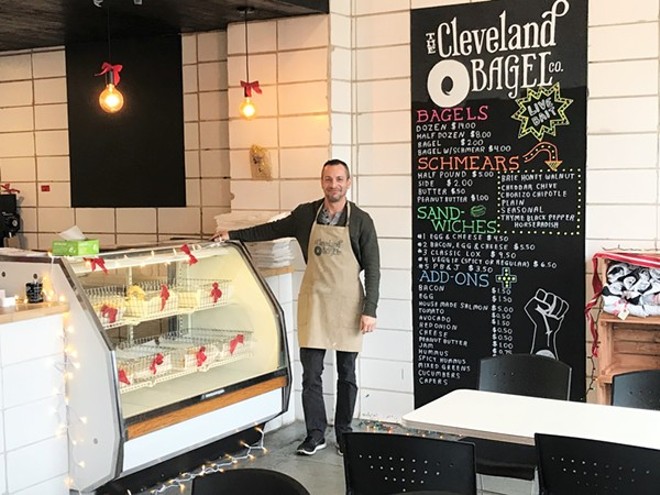 Just about a year after plans were announced, Cleveland Bagel's new east side location on Carnegie and East 77th St. is about ready to open.

That should happen Tuesday or mid-week, depending on final health inspections.

Herbst and his partner Geoff Hardman have enjoyed steady growth in the nearly six years since they first sold their homemade bagels at a farmer's market. They graduated from Herbst's apartment to a spot in the Cleveland Culinary Launch and Kitchen then to space at Ohio City Pasta and then their home on Detroit Ave.

The east side shop's offerings will be exactly like that of its west side sibling, with bagels, schmears, breakfast sandwiches, hummus, coffee and juices. The production facility and store occupies about 2,800 square feet of a facility that is also home to Souper Market and Produce Packaging.

"The west side shop was basically as-is when we moved in," said Dan Herbst. "With this one, while it's a little smaller, it was a blank space we could build out to be a more efficient."

Fifteen new employees were hired, and Cleveland Bagel has been paying $15 an hour for awhile now and leading the charge on that front. Herbst said there will probably be a few more employees added soon and the possibility exists, with the proximity to the Cleveland Clinic, to add a second shift.

On a related front, the new location will be open 7 days a week and will open at 6 a.m. rather than 6:30 a.m. to accommodate the Clinic's 7 a.m. shift change.

Once all the training is done and the kinks are worked out and they get the lay of the land, expect Cleveland Bagel to use the space to explore expanding into frozen bagels retailing and wholesaling.