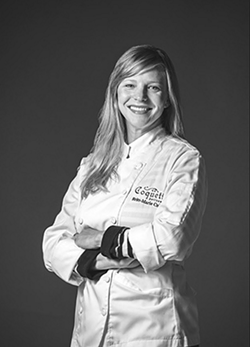 Britt-Marie Culey, known for her stunning French pastries, colorful macarons, and petit savory snacks, has accepted a position as Pastry Chef for Levy Restaurants, the company that handles all foodservice operations at the Huntington Convention Center locally as well as at major sports, entertainment and convention centers throughout the country.

In 2014, Culey, a graduate of the Le Cordon Bleu program at Western Culinary Institute, opened the popular University Circle pastry shop Coquette Patisserie (11607 Euclid Ave., 216-331-2841) along with her husband Shane. Little will change at that shop, promises Culey, who will remain the owner-operator. Stevee Wagner Terry, who has been on the job for two years, has been promoted to Executive Pastry Chef.

“This is a new position for Levy Restaurants at the convention center,” Culey explains. “I've joined the team to redevelop the pastry and bread program. We're working on elevating the dessert menu so that it can complement and compete with the current Cleveland – and national – culinary scene. While I have my work cut out for me, I am both excited for and humbled by the opportunity to bring the Cleveland Convention Center into the forefront of the food scene.”

One person who is thrilled about the hire is Matt Del Regno, GM and Executive Chef of the Huntington Convention Center and a 20-year staffer of Levy. As chef, Del Regno and his team prepare from-scratch meals for groups ranging in size from six to 1,600 and more. For large events like Content Marketing World, that number jumps to 3,500.

“It’s not necessarily uncommon to have a pastry person at a convention center, but it’s uncommon to have somebody of Britt’s caliber and skill set,” Del Regno says. “We do all of our pastries in house, and although we do a good job, we always want to be the best. It’s so hard to find people who are like-minded and really strong-skilled that can take us to the next level.”