Scene archives
In January, we shared the new Hilton Cleveland Downtown’s announcement that Maxime Kien, a native of the Cote d’Azur region of France, would oversee all culinary operations at the 600-room hotel, most notably the upscale three-level, 217-seat restaurant named The Burnham. Now we learn that he will partner with Cleveland restaurateur Zack Bruell on the project.

The arrangement marks the 11th restaurant that Bruell owns, operates or consults on. As consulting chef, Bruell will develop the concept and menu for the hotel’s flagship restaurant, The Burnham, which is on track to open in June. Native Ohioan Ryan Beck will serve as chef de cuisine.

“Creating a menu is like writing music,” Bruell explains. “My culinary travels throughout the years jump-started the creative side of my brain. I enjoy opening restaurants; it’s in my DNA.”

The three-chef team will craft an American-inspired menu, with an emphasis on small plates. There will be a focus on a diverse range of American cuisine past, present and future. The final menu might feature New Orleans-inspired bread pudding with gizzard and foie gras, Austin-inspired mac and cheese with greens and pulled pork, or Bruell’s Cleveland inspired fried confit of chicken with Swiss cheese dumplings, stewed cabbage and paprika sauce. The Burnham will serve breakfast, lunch and dinner.

“The experience of dining out should be as entertaining as a night at the theater,” says Teri Agosta, general manager for Hilton Cleveland Downtown. “Combining the talent and creative energy of these three chefs, we plan to arouse all five senses by showcasing three generations of culinary talent in an environment both relaxing and stimulating.” 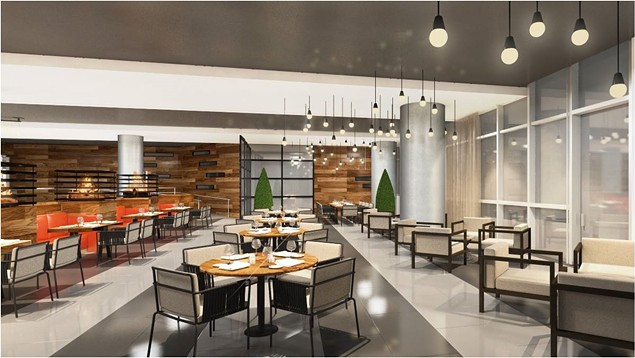