Consultant's Report on West Side Market Places Blame on City for Decline, Makes Recommendations for Turning It Around 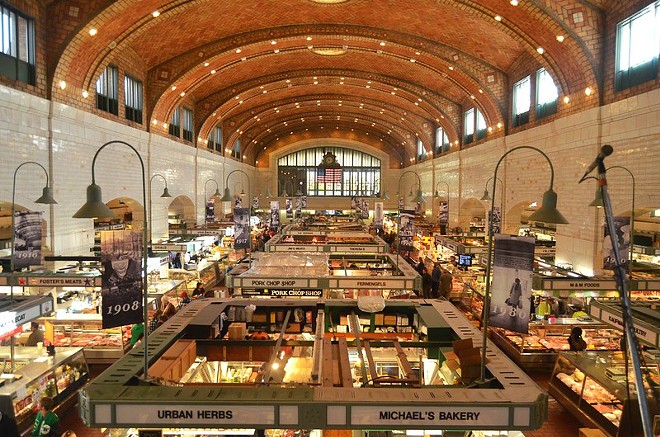 The West Side Market has survived in recent years despite mismanagement by the city of Cleveland, a near-complete lack of interest in modernizing its operation, no attempts at finding alternate revenue streams, and zero marketing, but could be turned around with a drastic change in culture, a plan to activate the space with events and seating for visitors, and a concerted effort to coordinate and cooperate with all the various stakeholders in the area, according to a 95-page draft report from nationally recognized market consultant David O’Neil. (The full report is embedded at the end of the story.)

Cleveland.com first published the draft's findings in a story yesterday that also included a report that Mayor Frank Jackson directed O'Neil to not include a recommendation that management of the market be transferred to an independent operator.

“How could you not address it in the report? Well, the city didn’t want it addressed in the report. But I thought that it’s definitely a possibility here. And I’m confident that there are many things in the report that are transferable to a new management entity,” O’Neil told Cleveland.com.

Regardless, his draft report makes clear that while the market faces numerous problems and obstacles, the city of Cleveland bears the brunt of the blame for how we got here.

Here, according to the consultant's report, can be summarized thusly: "With historically high vacancies, aging infrastructure, no marketing, and poor Management/Vendor relations, the market is either in crisis or pre-crisis and the time to act is now."

"The city can continue to be sincere about its desire to change the culture by acting and working with the potential partners that this consulting process has brought to the table," it reads. "Together, the resources are there to make a difference but there will need to be dedicated staff at the market to develop these partnerships."

The nuts and bolts of the findings across the 95 pages mirror the concerns and complaints of tenants, neighbors and the general public frequently voiced in recent years: Vendors are unhappy; new vendors aren't recruited; there's no communal seating space; there's a lack of prepared foods; the arcade and the alley aren't activated; service needs get buried in bureaucracy; a small management team barely responds to ongoing needs, let alone plans for the future; and the city has soured relationships with just about everyone involved.

O'Neil's report includes 200 recommendations, small and large, for how to rectify the situation, along with a slimmed-down list of action items that could be accomplished and provide serious help in the next two to three years.

"These action steps include creating flexible public spaces, organizing seasonal events, giving the market a deep clean and bringing new vendors and products to the market," the report says. "Overall, the most important change needed is to build the capacity of management, so it can implement positive changes and move the Market forward. However, the City cannot and should not do it alone. The best future for the market will be achievable with the efforts of many including UWSMTA and the vendors, neighborhood stakeholders, funders, and community partners."

Transferring operations to a non-profit entity has been a popular rallying cry, and while not universally held as the best possible option (plenty of folks believe the city could simply manage it better), it's one that incoming Cleveland mayor Justin Bibb said he was in favor of on the campaign trail earlier this year.

As Scene reported from a mayoral candidate forum in Tremont in August:

Bibb believes absolutely that the market needs a new nonprofit manager, and noted that he was aligned with McCormack in that respect. "I'm not an expert on everything," he said, "and it's important that we bring experts inside City Hall who understand how to manage a public market." Bibb believes that the WSM is a "gem of an asset" and that a nonprofit operator would most effectively preserve it as such.


However he decides to proceed, the market's future hangs in the balance:

"The next few years will be quite challenging – to simultaneously rebuild the strength of the market during an unpredictable global pandemic and maintain continuous operations while it undergoes its largest ever capital improvement program as the city makes a $12M investment in the market’s future, scheduled to begin later this year," the consultant's report says.