Craft Collective
Last night, the Craft Collective celebrated its grand opening at Van Aken District in Shaker Heights. Located inside the Market Hall (3449 Tuttle Rd., 216-556-1146), the 70-seat taproom specializes in ciders, sours and meads, about 20 percent of which hail from sister establishment BottleHouse Brewery’s own tanks and barrels. The rest, along with the selection of non-sour beers, will come from other producers.

“Craft Collective is a side project of The BottleHouse Brewery & Meadery,” explains owner Brian Benchek. “Harnessing the relationships we have built through BottleHouse, Craft Collective will offer up a curated selection of the area’s finest beer, real cider, mead, wine and spirits. Each producer featured must meet a strict set of standards regarding their production methods, ingredient selection, dedication to preserving their respective craft and overall business philosophy.”

Craft Collective
The large corner space, furnished with a 28-foot bar and picnic tables, opens both to the food hall and, come spring, outdoors to a patio. In addition to the craft beers, the beverage program also features bourbon-heavy cocktails, amaros and wines.

Benchek says that he’s happy to leave the cooking to other vendors in the hall, which now includes Banter, On the Rise Bakery and Scorpacciata Pasta Co. Soon, Brassica will join them, as will Michael’s Genuine and chef Jonathon Sawyer’s new concept outside the hall.

"We're not in the food game, so it's perfect to be in the middle of this food hall," Benchek says. "But like our other taprooms, this is going to be a place for the community to gather, a central hub where you can hang out to drink and eat." 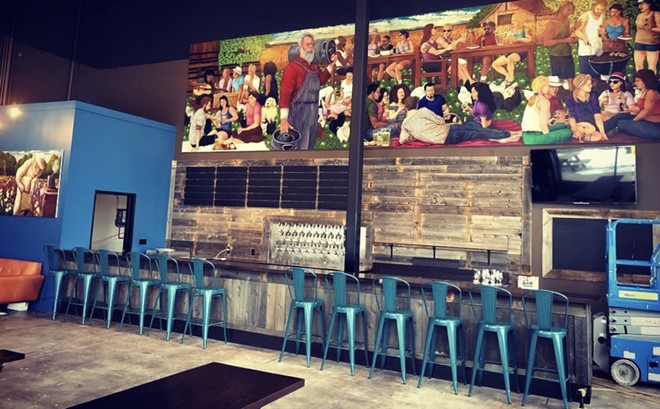