Sheng Long Yu
By now, Clevelanders are pretty well versed in Vietnamese pho, Japanese ramen and Taiwanese beef noodle soup. Soon, we’ll have an opportunity to get acquainted with another Asian noodle bowl, this one hailing from the Yunnan province of China. “Crossing the bridge noodles” are enjoyed in a specific way that’s similar, but not identical, to hot pot.

Sheng Long Yu, owner of Shinto Japanese Steakhouse in Strongsville and Kenko in University Circle and Kent, got his first taste of crossing the bridge noodles in Canada, where a Shanghai-based chain of restaurants is spreading like wildfire across the country. That restaurant is Dagu Rice Noodle, and it is likely to do the same on this side of the Canada-U.S. border.

“The last time I went to Canada, I went to one of the stores and thought, ‘This is great stuff. Why not bring it to Cleveland,’” notes Yu. “If there’s one thing that Cleveland needs, especially when it comes to noodle soup, it is diversity.” 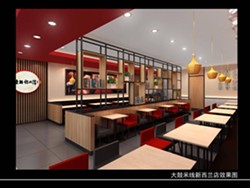 Sheng Long Yu
When it opens in the next couple of months, Dagu Rice Noodle will be the first global (or international or national, for that matter) brand to open in Asiatown, a district built around immigrant-owned mom-and-pop shops. When Yu learned about the closing of Koko Café (3710 Payne Ave.), he knew the location would be ideal for the concept, which caters not to Western palates but to Asian ones.

“First of all, it’s between CSU and Case, and both have a lot of Asian population,” explains Yu. “Number two, Chinatown already has a decent amount of draw for the general public. In addition to that, everybody knows Koko Bakery [next door].”

Yu adds that in terms of franchise restaurants, these are “as personalized as it gets for a chain.”

So what are crossing the bridge noodles? The star of the show, not surprisingly, are the rice noodles, which come from Dagu’s own facility in China. Crocks of still-boiling broth are delivered to the table along with a raft of raw ingredients that get added last minute, along with the noodles, to the hot soup. While “crossing the bridge” often refers to a romantic fable about a man and wife, it also represents the movement of food to bowl while eating.

Broths are pork or vegetable based, spicy or not spicy, and served alongside ingredients like quail eggs, tofu skin, bamboo shoots, kimchi, preserved vegetables, corn, Spam, beef, shrimp and various sauces and pastes. The broth is delivered in bowls that are heated to a staggering 300 degrees Fahrenheit (there are warning signs), so even after the noodles and add-ons are introduced, the soup remains hot. Other menu options come fully assembled.

To drink, there are fruit teas and cheese teas, which might soon edge out bubble tea as the next hot beverage trend. Those who adore it swear it tastes better than it sounds thanks to its sweet flavor, silky texture and frothy cream cheese-based topping.

Depending on how soon it opens, Yu’s Dagu Rice Noodle will be the third, second or even first U.S. based shop to open. Two are currently under construction in the States, one in California and another in Las Vegas. And Yu doesn’t plan to stop at just one, he says, adding that he has his sights set on other shops around Ohio, Michigan and Pennsylvania.