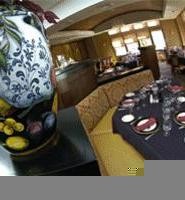 Walter Novak
This Leopard can't hide its spots.
Anchoring the tony Bertram Inn & Conference Center in Aurora, the Leopard has been intended as a showcase for fine dining since it opened in March 2000. Our inaugural visit came not long after the restaurant's debut; at that point, the service and ambiance were first-rate, and if then-executive chef Zachary Conover's robust cuisine didn't always hit the mark, it came close enough for us to give the Leopard the critical equivalent of a tummy tickle and a rub behind the ears.

By 2003, the restaurant had gone on to snare its first AAA Four-Diamond rating, and each year since then has brought another, placing the Leopard in the same pack as the area's other Four-Diamond winners: the Baricelli Inn, Giovanni's, Lockkeepers, and the recently shuttered Century at the Ritz-Carlton.

But as Century's demise might imply, times are tough for formal dining rooms: In the region's depressed economy, there simply aren't enough well-heeled customers to fill the seats. That much became apparent during recent Thursday- and Friday-night visits to the Leopard, where empty tables outnumbered occupied ones by a ratio of at least 3 to 1.

Unfortunately, the Leopard doesn't seem to be holding up well under the strain. For one thing, with those kinds of numbers, management probably feels it makes fiscal sense to cut back on amenities like valet parking and a gracious maître d'. For us, though, those cutbacks meant self-parking and then dodging the raindrops in our dress-up clothes, and the melancholy experience of coming and going without anyone seeming to notice or care.

Not that we insist upon coddling -- unless, of course, we're coughing up roughly $160 for dinner for two, with two glasses of wine, tax, and tip. At those prices, pampering is an expected amenity, no matter how slow business might be; and those expectations extend to the condition of the restrooms too, where the overflowing trash cans, empty toilet-paper holders, and messy sinks we encountered should be out of the question.

Other non-award-winning oddities abounded. For one thing, our otherwise likable server seemed to be under instructions to describe executive chef Matt Mathlage's menu in excruciating detail, explaining the chef's "vision," pushing particular dishes, and outlining preparations so minutely, we feared that at any moment we might learn the name and zodiac sign of the lamb that was destined to become our dinner.

He also took some strange liberties with my wine order, substituting a half-bottle of claret for the $7.50 glass of Cabernet that I had ordered. If I drank only a glass of the claret, he assured me, the price would be the same as for the Cab; but should I happen to decide I really wanted the entire half-bottle . . . why, there it was, already open and waiting for me! "Does that guy know how to sell up or what?" marveled a companion.

Of course, nearly all this could have been forgiven in exchange for fabulous food. Unfortunately, the Leopard was caught napping on that window ledge too.

A graduate of Pittsburgh's International Culinary Academy, Chef Mathlage takes a trendy global stance, with seasonal menus that incorporate Asian, American, and Mediterranean accents. Coyness is on the menu too, in tongue-in-cheek creations like "bacon and eggs" (pork belly and a quail egg, wink-wink) and a $45 lobster "BLT"; and such conceits as "lamb two ways" and the Tuna Trilogy (a.k.a. tuna three ways).

While top-ranked chefs can get away with that sort of self-conscious cuteness, it doesn't work out so well for Mathlage and his crew, who complicate matters by making more than their share of rookie errors.

For instance, two of the three presentations in the Tuna Trilogy appetizer suffered from overcooking; likewise, an entrée of orange-and-crumb-crusted cod had been done to a dry and lifeless turn. On the other hand, the poussin (young chicken) in an entrée of "chicken and biscuits" was still oozing pink juices, and a thinly pounded veal chop managed to be well done along the edges, yet raw at the bone. (The unfortunate veal chop also sported a thick white membrane, making it hard to cut and nearly impossible to chew.)

But even properly prepared dishes rarely popped. That included the "lamb two ways" -- an unremarkable chop and a tender portion of stuffed breast meat -- that needed a vigorous tableside salting to rouse it, and the PEI mussel amuse bouche, which, while prettily plated on pink Hawaiian sea salt and garnished with coconut-curry cream and a sprig of baby cilantro, looked far more riveting than it tasted.

Dessert options, from pastry chef Anton Yeranossian, are the usual high-end architectural offerings -- beautifully constructed, fancifully plated, but ultimately less fun to eat than to admire. Sample sweeties are brought to the table on a rolling cart; unfortunately, on one of our visits, the jauntily assembled goods seemed well past their prime, with a fruit coulis on one plate reduced to nothing more than a pink stain, and the hazelnut foam on another channeling the spirit of congealed gravy. Not an appetizing spectacle at all.

As we scampered back to the car amid the raindrops, a companion put it all in perspective. "When it comes to towing and TripTiks, I trust AAA implicitly," he noted. "But when it comes to restaurant recommendations . . . after this evening, maybe not so much."