Dining Review: Boss Chickn Beer Nails the Chicken and Beer, Plus the Veg Options to Boot 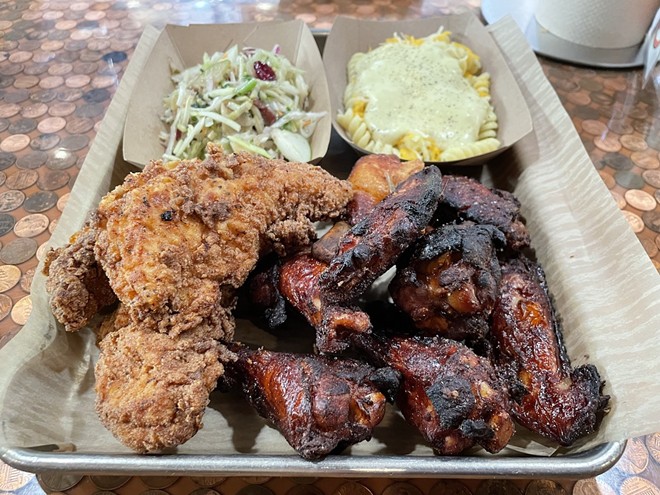 Boss Chickn Beer has been open in Berea for four years, but it was only recently that I had my first experience with the company. What’s the point of driving 20 miles to pick up an order of chicken wings, breaded chicken tenders or fried chicken sandwiches when I literally can walk to any number of places to secure the same. It was only after owners Heather Doeberling and Emily Moes opened a second location in Bay Village, while simultaneously announcing plans for a third store in Seven Hills, that I began to reconsider my position.

I became a believer just moments into my visit to the Bay Village location. Unlike practically every other fast-casual chicken joint around, where everything takes place behind the kitchen door, Boss Chickn Beer operates like an old-school diner. The bulk of the cooking takes place out in the open, right behind the long counter. The same people who fetch the beers take your order and cook the food. Not only does this approach streamline the operation and eliminate miscommunication between server and cook, it makes for a lively pub-like atmosphere.

For beer lovers, the selection here is worth the trip alone. A quick scan of the offerings revealed an all-Ohio list that intentionally sidesteps the ubiquitous flagships common elsewhere. On offer were beers from Phoenix Brewing in Mansfield, MadCap in Kent, Missing Mountain in Cuyahoga Falls, Twin Oast in Port Clinton and Modern Methods in Warren. Pints generally are priced between $5 and $7.

“Why would we carry the same beer that you can get at any grocery store,” staffer Will Ruiz said.

While we we’re enjoying our first round of beers we spotted the cooks hand-dipping and frying onion rings ($7) to order. Apparently, it’s a Thursday-only special and, well, wouldn’t you know. Golden brown, shatteringly crisp, with an almost tempura-like crust, these rings soared to the top of my list. They come with a tangy Carolina-style mustard sauce for dipping.

Since it was our first time, Ruiz suggested that we start with the wing and tender combo ($28), which includes a pound of wings, three tenders, two sides and three sauces. In addition to making our order, and those of the other guests in the room, the lean crew was juggling incoming phone calls and outgoing pick-up orders like seasoned pros, all while cracking jokes and keeping beer glasses full.

There are plenty of ways a wing can go wrong, from the bird to the prep to cook to the sauce. It only takes a second to see that Boss does it different and does it right. Before hitting the fryer, the cage-free, Ohio-raised poultry is brined, baked and chilled. After a quick swim in the fat, they arrive hot, uber-crisp and mahogany colored. The drums and flats are meaty and without sauce. We eagerly drag them through sauces that range from dilly ranch to a spicy jalapeno-studded Buffalo.

“A lot of people want to do wings the easy way: take them out of the box, throw them into the fryer and let the sauce be the star of the show,” Doeberling explains. “We don’t sauce our wings. For us, the chicken is the star and the sauce is just a bonus.”

Boss’ beefy tenders are crunchy, flavorful and undeniably tender. They come with a craggily crust that grabs and holds sauces like a champ. Enjoy them straight up or tucked into soft, slick pretzel buns as part of a half-dozen sandwiches. We loved the mile-high Cleveland Hot Chick ($13), which consisted of a pair of tenders topped with jalapeno pickles, slaw and hot sauce.

When it comes to sides, diners can choose from hand-cut fries, mac and cheese, flash-fried Brussels sprouts, three-bean chili and veggie slaw.

As the pandemic raged on during the past two years, and as chicken supply-chain problems became more of an issue, Doeberling and Moes beefed up the vegan side of the menu. Items like vegan wings, tenders and veggies are cooked in dedicated deep fryers. What’s more, everything that goes into those fryers, including the breaded chicken tenders, is gluten-free.

“I think a lot of people who want to eat in a certain way, either for allergy, dietary or personal reasons, don’t necessarily trust – and I kind of don’t blame them,” adds Doeberling. “Having the open kitchen is super-important because we can tell people, ‘Come in and see what we’re doing.’”