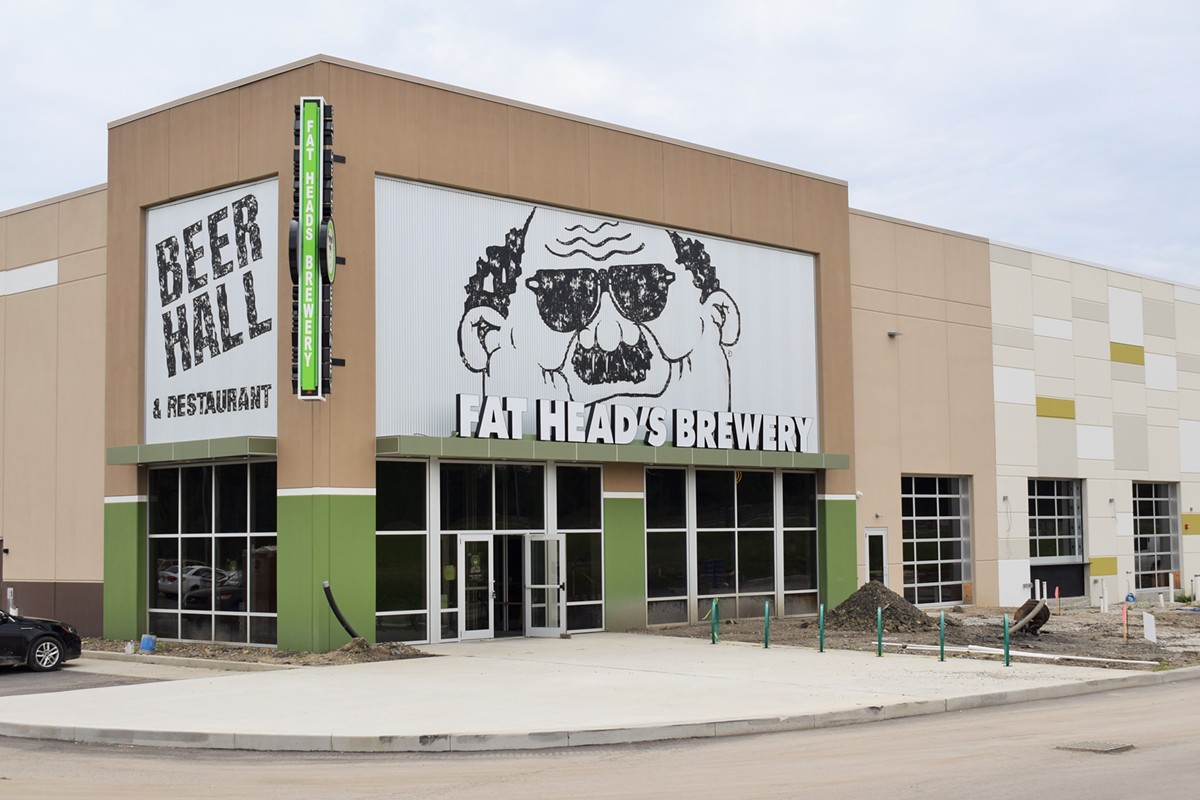 It's impossible to miss Fat Head's massive new brewery while travelling along I-71. The cluster of eight towering stainless steel tanks, visible even at 65 mph, is as clear a signal as to the building's purpose as the iconic "fat head" logo emblazoned on the façade. Inside each of those silos at any given time is approximately 30,000 pints of beer, give or take. And those eight tanks represent just half of the brewery's capacity, which is twice that of the previous production facility.

"We essentially doubled our brewing capacity from 30,000 barrels to 60,000 barrels," says owner and brewmaster Matt Cole.

Everything about this new facility is big, from the price tag to the dining room to the brewery. At a glance, the $13 million compound has gobbled up approximately 75,000 square feet in Middleburgh Heights. Located less than a mile as the crow flies from the former production brewery, this ambitious venture ups the ante in every conceivable way.

When it opens at 11:00 a.m. on Monday August 20, Fat Head's Brewery, Beer Hall and Restaurant (17450 Engle Lake Dr., 216-898-0242) will join the 10-year-old brewpub in North Olmsted, the brand new brewpub in Canton, and the 25-year-old tavern in Pittsburgh. The first thing that strikes a visitor upon arrival is the scale of the space. That sensation is accompanied by the pleasant aromas of wood smoke and hops. While fresh beer will be the primary attraction here, the barbecue likely will be a very close second.

A few steps in lands a diner in the cavernous dining room, a 260-seat wood-trimmed beer hall. In an attempt to bring the room down to human scale, the folks at Richardson Design employed techniques like blacking out the soaring warehouse ceilings, suspending barn beams and lighting fixtures at middling heights, and drawing one's attention to the suspended brewhouse with the sky-blue backdrop. Acres of sound-dampening panels should dim the clatter.

Outfitted with hints of teak, ash, maple and oak, the dining room offers seating at booths, tables, high-tops, communal benches, and the mile-long bar. A pergola-shaded patio, still under construction, will provide seating for another 75 on the other side of a series of glass garage doors. A more intimate barrel-aging room will allow groups of up to 70 people to dine among bourbon barrels filled with Battleaxe Baltic Porter and slowly slumbering holiday brews.

At the bar, 20 taps will dispense award-winning Fat Head's creations like Head Hunter IPA, Bumble Berry Blueberry Ale, Sunshine Daydream Session Ale and Goggle Fogger Hefeweizen along with pub-specials from a smaller R&D brewhouse on site. Another 10 taps will be set aside for guest beers, ciders, meads and nonalcoholic beverages like root beer. Directly above the bar is the main brewing platform, the command center of the operation. The state-of-the-art German-built system literally can be controlled from grain to glass via a smartphone.

In back, a spiffy new $1.5-million canning line joins a new keg line that can clean, sanitize and fill a keg in 60 seconds. Those two systems join an existing bottling line, the three of which make up the backbone of Fat Head's sizeable distribution network. Folks can enjoy a cold Head Hunter as far afield as Pennsylvania, Indianapolis and all corners of Ohio. And New York, Kentucky and Michigan might not be far behind. But Cole says the real push is to sow deeper roots right here at home in the region, where the brand already is well regarded.

If you've ever stepped into a hotel kitchen, you can picture what lies behind the swinging doors here. The 3,000-square-foot galley is equipped to feed large crowds. Executive chef Derek Wilson and chef Nate Sieg have at their disposal a live-fire wood grill that will add a seductively smoky flavor to chicken wings, kielbasa and burgers. A strictly hardwood-fueled Oyler Pit smoker from J&R will do sweet justice to beef brisket, pulled pork, St. Louis ribs, whole chickens, and pastrami, which appear in items scattered throughout the meaty menu.

"The menus are largely similar from place to place, but we're going heavy on the barbecue here," reports Cole, a competition barbecue champ himself.

Appetizers include pretzels paired with cheese sauce and honey mustard, panko-breaded and fried pickles, and smokehouse nachos loaded with pulled pork, cheddar cheese sauce and jalapeños. In the sandwich department is a Philly cheesesteak made with smoked and shaved top round, peppers and onions, a Reuben starring house-smoked pastrami, and the now-familiar roundup of Headwiches, those intimidatingly large creations. Rounding out the menu are salads and stone oven pizzas.

Training for the 125 employees who will work in the restaurant and brewery is wrapping up now.