Owner Will Hollingsworth has had a long time to ruminate on the reopening of his Spotted Owl bars in Tremont (710 Jefferson Ave., 216-795-5595) and Akron (60 S. Maple St., 330-252-9099). He has remained closed in both locations this entire time (save for some carry-out business) because he didn’t want to compromise the experience he has worked so hard to create. So instead, he invented an entirely new experience for customers to enjoy at least through summer.

“I think that we’ve been very uncompromising through this whole thing,” Hollingsworth says. “This is going to be a strange summer. Customers are still getting used to going out to bars. So rather than open up the Spotted Owl as they remember it in summer, when we would be competing with patios anyway, I thought: what if we did a totally new concept just for the outdoors that was fun and different.”

And what a space it is. Guests of the Spotted Owl might recall some green space out front, but it has never been open to customers. This elevated, brick wall-ensconced parklet in the heart of Tremont is now decked out with umbrella-topped tables, soft seating areas and room to roam. New ownership of the Tremont Place Lofts (which will become The Herald by summer’s end) by Graham Veysey, Marika Shioiri-Clark and Michael Panzica has opened the door to this new opportunity.

Twin Palms is a nod to Frank Sinatra, and that’s the vibe Hollingsworth is going for. “Think Palm Springs, old Las Vegas,” he says. “Maybe poolside at the casino.”

Douglas Trattner
How to guide for building cocktails.
Cocktails like the French 75, Rosewater Julip and Pineapple Daiquiri are presented in their own mini bottles alongside an ice bucket, glasses, washes and garnishes. Guests build their own drinks by following a graphic guide. Along with add-ons like prosecco and lime for the margarita, there’s a tiny atomizer filled with salt water to simulate the salted rim.

Guests can also build their own highballs from a selection of liquors, washes and garnishes. Also on offer are shots, beers, wines and seltzers. All drinks are available to-go as well.

There is room for approximately 60 guests on a walk-in basis. The Spotted Owl is not open except for use of the restrooms. Also, given the residential nature of the building, Twin Palms will be open from 4 to 10 p.m. Wednesday through Saturday.

Twin Palms is opening simultaneously in Tremont and Akron this Thursday. Both are expected to run until fall, when hopefully both Spotted Owls will reopen.

“It’s been a really rough year,” Hollingsworth says. “And I have a deep hole to dig us out of. But we’ve always done really wild, new, bold things and the older we’ve gotten, the more successful they’ve been. And we think people have grown to trust us.”

Heidi Rolf
Cocktails at the new Twin Palms at the Spotted Owl.
click to enlarge 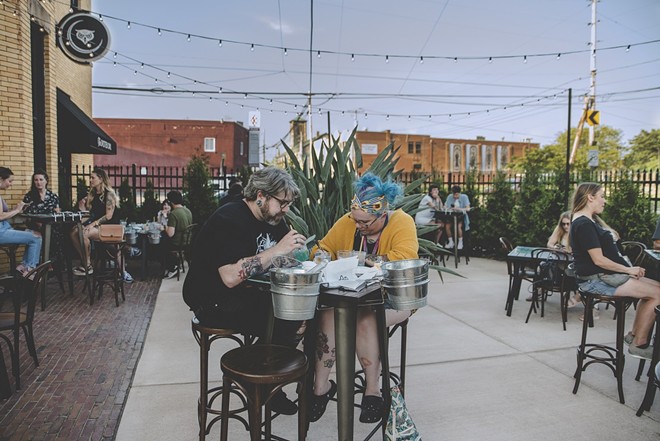