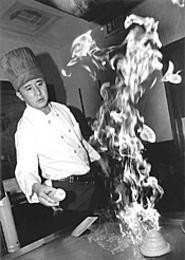 Walter Novak
The stir-fried food hit all the high notes, and the hibachi chefs put on a great show.
Maybe you love it, maybe you hate it, but few diners are neutral on the notion of sitting around the hibachi table at a Japanese steakhouse. Those who scorn this exercise in communal dining and entertainment complain that it's akin to a forced encounter-group session. Plus, they sigh, just how many times can one feign amazement as a hibachi chef tosses an egg off his spatula and catches it in his tall, white toque?

On the other hand, those who dig this particularly chummy form of dinner theater can wax downright poetic about the virtues of sharing food with strangers. And as for the chefs' same old corny routines, why, these easygoing souls find them as endlessly amusing as a favorite knock-knock joke.

But whatever one's opinion of the hibachi experience, it is irrefutable that the staff of Creekview Sakura, a Japanese restaurant in Brecksville, does it up right. From the cheerful waiter who greeted us when we took our seats to the hibachi chef who wielded his knives like a modern-day samurai, the vibe was friendly and casual, and while we had brought along only a small posse of our own, the other diners at "our" table proved to be polite, good-natured, and mostly too busy pondering the list of specialty martinis, wines, and imported and domestic beers (including Japanese brews like Sapporo, Kirin Ichiban, and Asahi) to invade our personal space with superficial intimacies.

Even better, the simple, stir-fried food hit all the right notes, thanks to attentive preparation, generous use of seasonings, and the ingredients' full, fresh flavors. Sure, pile on enough butter and soy sauce, and there's not much that doesn't taste yummy. But the gustatory goodness extended well beyond the basics. Filet mignon, for instance, was cooked precisely to order and plush as velvet; boneless, skinless chicken breast fairly danced with the nutty, crunchy counterpoint of toasted sesame seed. An avalanche of fresh mung-bean sprouts, tossed with a mountain of stir-fried rice, gave that side dish a vibrant, earthy crunch; and a mélange of stir-fried veggies -- sliced mushrooms, onion, zucchini, broccoli florets, and batons of carrot -- had pure, wholesome flavor to spare.

Our seafood lover watched in almost transcendental awe as sweet-as-sugar scallops changed from translucence to pearly opalescence on the hot griddle, and murmured with appreciation as gray, oversized shrimp were transformed into juicy delicacies of seashell pink. Even an unadventurous companion approved of his thinly sliced New York strip steak "sukiyaki," which was tender, beefy, and meticulously trimmed, and given a special garnish of colorful red and green pepper rings.

While steak, chicken, and seafood (including lobster) are the basic building blocks of Sakura's hibachi dinners, diners can mix and match up to five of the proteins to create a favorite combination, such as shrimp, scallops, and lobster, say, or steak, chicken, and shrimp. And in addition to the large servings of meat, rice, and veggies, dinners also include miso soup and a small green salad with a light, almost citrusy ginger dressing. There are vegetarian options available, too, as well as child-sized portions, making the hibachi experience particularly satisfying for a family or other large, diverse gatherings.

Like most American-style Japanese restaurants, though, Sakura's lengthy menu goes far beyond mere hibachi cooking, and it was here, amid the freshly prepared sushi and sashimi, and a host of traditional appetizers and entrées, that we discovered some weaknesses.

For those who can't get enough of the communal-dining possibilities, a seat at Sakura's handsome sushi bar provides a friendly, though more sedate, alternative to the hibachi tables. And if the sure-handed sushi chefs never once crack a joke or send spoonfuls of tobiko flying through the air, their manual dexterity is no less impressive, as they slice, wrap, and roll their ingredients with intensity. Their creations include all the standards -- à la carte nigiri, maki, futomaki, and temaki sushi; sashimi; chirashi (sliced raw and cooked fish, scattered over a bed of rice); and large combination dinners for two or more, such as the $46.50 Love Boat, brought to the table on a little wooden ship.

Overall, ingredients such as lush, smoky unagi (freshwater eel), sweet amaebi (shrimp), custard-like tamago (layered, cooked egg), and spicy tuna tasted clean and fresh as a Pacific breeze, and were served in ample portions, along with the requisite soy sauce, wasabi, and sliced, pickled ginger. However, at least during a lunch visit, the infrastructure of all sushi -- steamed rice -- wasn't adequately sticky; as a result, pieces of both nigiri and maki sushi fell apart as we tried to lift them with our chopsticks. Also, the sushi's presentation, on plain white plates, was not as artful as at some of the region's other sushi bars.

Dishes chosen from among the menu's non-sushi starters, main courses, and desserts, and served at one of the restaurant's conventional tables or booths, were even more lackluster. While they were as addictively sweet-and-salty as any bar snack, an appetizer of moist edamame (boiled, salted soy beans, still in the pod) raised an eyebrow: We've had them chilled and we've had them warm, but never before have we had edamame where half the beans were hot and the other half icy cold. And if an entrée of shrimp-and-vegetable tempura looked tempting, with its long, golden rods of battered and fried shrimp arranged like tent poles above thick slices of sweet potato and zucchini, it only took a few bites to realize that the tempura was tremendously greasy and that some of the veggies, particularly a large floret of broccoli, had been overcooked to an almost pastelike consistency.

The flavor profile of a hot noodle dish (dan-dan noodles), overwhelmed by the bitter bite of spicy peppers, was also disappointingly flat and uninteresting. Somehow, garnishes of ground, fried chicken and julienned cucumber, onion, and green pepper added remarkably little nuance or subtlety, and none of the interplay of flavors and textures that we've come to expect from fine Asian fare.

And if we weren't expecting to end our meal with towering, sugary confections (this is, after all, a cuisine that embraces fresh fruit as a favorite dessert), neither did we expect that the deep-fried breading on a ball of tempura ice cream would be limp and oil-logged; nor that the green-tea ice cream inside a chewy mochi (finely textured rice-cake dough) wrapper would be completely melted. (Our server gladly replaced the liquid green-tea mochi ice cream with a properly frozen red-bean version.)

But while we obviously encountered some rough edges to this one-year-old restaurant (the younger sib to the Lakewood Sakura), the sleek, sizzling hibachi dining surely wasn't one of them. And for the record, we never get tired of watching a wisecracking hibachi chef flip those eggs into his hat.